Former President George H.W. Bush has passed away at age 94, a statement released by his personal office confirmed. His death follows years of health complications.

George H. W. Bush is a political icon who is known for fighting to protect American exceptionalism.

Bush recently lost his wife of 73 years, Barbara Bush, who passed away at age 92 in April.

“I always knew Barbara was the most beloved woman in the world, and in fact I used to tease her that I had a complex about that fact,” George H. W. Bush said in a statement at the time of her death.

“But the truth is the outpouring of love and friendship being directed at The Enforcer is lifting us all up. We have faith she is in heaven, and we know life will go on — as she would have it. So cross the Bushes off your worry list,” he had said.

After winning the 1988 Presidential election, George H. W. Bush became the first sitting Vice President to be elected President since 1837.

Many of President George H. W. Bush’s accomplishments during his tenure took place on the world stage.

Soon after taking office, he helped facilitate the demise of the Soviet Union and directed the removal of Panamanian dictator Manuel Noriega.

Then, in August of 1990, he created a national coalition to drive Iraqi President Saddam Hussein out of Kuwait after they invaded the country.

George H. W. Bush’s handling of the situation is considered to be one of the highlights of his Presidency.

In a famous speech regarding the invasion, Bush said:

“Now the 28 countries with forces in the Gulf area have exhausted all reasonable efforts to reach a peaceful resolution. [We] have no choice but to drive Saddam from Kuwait by force. We will not fail. We are determined to knock out Saddam Hussein’s nuclear bomb potential. We will also destroy his chemical weapons facilities. Much of Saddam’s artillery and tanks will be destroyed. … Our objectives are clear: Saddam Hussein’s forces will leave Kuwait.”

Following his presidency, George H. W. Bush made many public appearances with his son George W. Bush during his Presidential campaign. 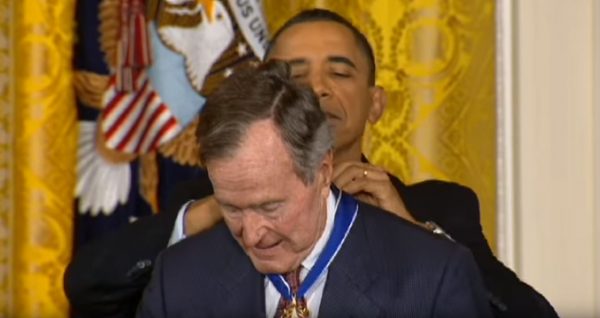 In 2012, George H. W. Bush was diagnosed vascular parkinsonism, which later confined him to a wheelchair. Then in 2014, he was hospitalized for two months while he fought bronchitis.

Despite the various health complications that he faced later in life, George H. W. Bush skydived to celebrate several of his birthdays, with his last jump being in June 2014.