Dr. Gladys West is inducted into the Air Force Space and Missile Pioneers Hall of Fame during a ceremony in her honor at the Pentagon in Washington, D.C., Dec. 6, 2018. ( Adrian Cadiz/USAF)
December 28, 2018 Cheryl Hinneburg
Share
Tweet
Flip

An 87-year-old woman — best known for being a mathematician and her significant role in the invention of the GPS — was inducted into the Air Force Space and Missile Pioneers Hall of Fame during a ceremony at the Pentagon held in her honor on Dec. 6, 2018.

The initial formal ceremony was held in August, but Dr. West was not able to be there at that time.

Before the introduction of the GPS, West was one of the few women who were employed by the military for computing work.

West grew up in Dinwiddie County, Va. Her parents worked in the fields, something West said she knew she didn’t want any part of, the Fredricksburg.com reported.

“I realized I had to get an education to get out,” she said.

West worked hard and graduated at the top of her class, earning her complete scholarships to attend Virginia State College, where her major was math.

After graduating with her masters, West took a job with the U.S. Naval Weapons Laboratory in 1956 as a mathematician.

She was the second African American woman to ever work there.

Her efforts included participating in a substantial study in the 1960s that verified “the regularity of Pluto’s motion relative to Neptune,” according to the U.S. Air Force. 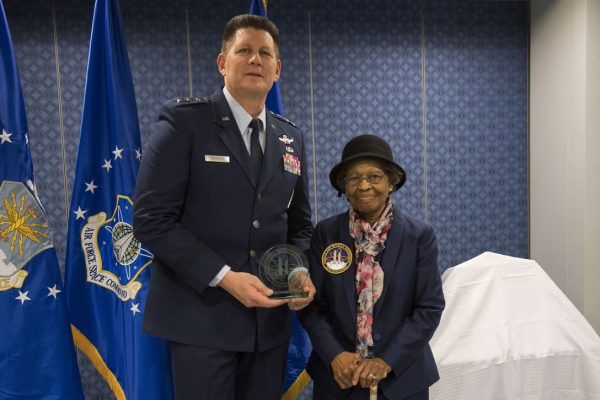 Air Force Space Command Vice Commander Lt. Gen. DT Thompson delivers presents Dr. Gladys West with an award as she is inducted into the Air Force Space and Missile Pioneers Hall of Fame during a ceremony in her honor at the Pentagon in Washington, D.C., Dec. 6, 2018. (Adrian Cadiz/U.S. Air Force)

“From the mid-1970s through the 1980s, using complex algorithms to account for variations in gravitational, tidal, and other forces that distort Earth’s shape, she programmed an IBM 7030 Stretch computer to deliver increasingly refined calculations for an extremely accurate geodetic Earth model, a geoid, optimized for what ultimately became the Global Positioning System (GPS) orbit,” according to Air Force Space Command.

Her husband, Gwen James, told Fredricksburg.com, “GPS has changed the lives of everyone forever. There is not a segment of this global society—military, auto industry, cell phone industry, social media, parents, NASA, etc.—that does not utilize the Global Positioning System.”

“I think her story is amazing,” James added.

West said she didn’t realize her work would be so important.

“When you’re working every day, you’re not thinking, ‘What impact is this going to have on the world?’ You’re thinking, ‘I’ve got to get this right,” West said.

Another, bigger migrant caravan is set to leave from Honduras next month

Iran unveils first annual budget since US sanctions were reimposed