Ukraine has barred Russian male nationals between 16 and 60 from traveling to the country, President Petro Poroshenko announced on November 30.

The move comes amid escalation tensions between the two countries after Russian border guards on November 25 opened fire and captured three Ukrainian naval vessels and their 24-member crew off Crimea, which Russia forcibly annexed from Ukraine in 2014. 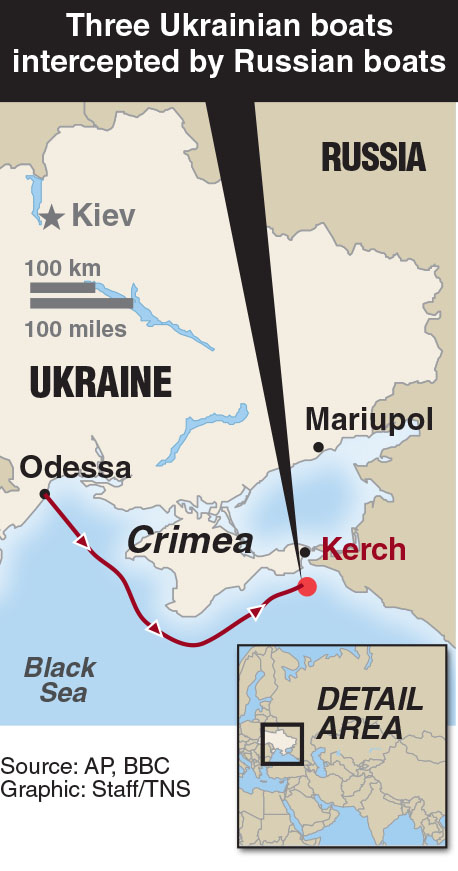 The Ukrainian leader has called for a stronger NATO presence in the Black Sea region and for further Western sanctions against Russia.

Poroshenko tweeted on November 30 that the restrictions on Russian travelers have been taken to prevent Russia from forming “private armies” fighting on Ukrainian soil.

Russia has backed separatists in eastern Ukraine in a conflict that has killed more than 10,300 people since April 2014.

Petro Tsygykal, head of Ukraine’s border guard service, said border checkpoints were being bolstered, according to a statement on the presidential website.

Border Guard Service spokesman Andriy Demchenko told Ukraine’s Hromadske TV on November 30 that Russian male nationals would be barred from entering Ukraine during the period of martial law, which is now due to continue until December 26.

Russia said it had no plans to mirror the Ukrainian move. Foreign Ministry spokeswoman Maria Zakharova blamed the Ukrainian government for implementing a policy that hurts ordinary people.

On November 29, Poroshenko said that Kyiv will impose “restrictions” on Russian citizens in Ukraine and the country’s border guard said only Ukrainian nationals would be allowed to travel to Crimea in connection with the imposition of martial law for 30 days in parts of the country.

Ukrainian Foreign Ministry spokeswoman Kateryna Zelenko confirmed to RFE/RL by phone that foreign journalists are among those excluded from entering Crimea from Ukraine but said her ministry was discussing whether to grant them an exception.

The official confirmation came hours after Anna-Lena Lauren, a Moscow-based foreign correspondent for the Swedish newspaper Dagens Nyheter, was barred by Ukrainian border guards from entering Crimea through the what Ukraine deems the only legal route.

Russia said it had no plans to mirror the Ukrainian move. Foreign Ministry spokeswoman Maria Zakharova blamed the Ukrainian government for implementing a policy that hurts ordinary people.

Russia says the Ukrainians had violated its border while Ukraine says its ships were acting in line with international maritime rules.

A Crimean court earlier this week ruled to keep the Ukrainian seamen behind bars for two months pending the investigation.

Earlier on November 30, the Kremlin said it regrets U.S. President Donald Trump’s decision to cancel a meeting with Russian President Vladimir Putin at an upcoming Group of 20 (G20) summit.

“This means that discussion of important issues on the international and bilateral agenda will be postponed indefinitely,” Putin’s spokesman Dmitry Peskov told Russian state media.

Putin, he said, “is ready to have contacts with his American counterpart.”

Trump said he was cancelling the meeting scheduled for this weekend at the G20 summit in Argentina over Russia’s recent seizure of the Ukrainian vessels.

“Based on the fact that the ships and sailors have not been returned to Ukraine from Russia, I have decided it would be best for all parties concerned to cancel my previously scheduled meeting…in Argentina with President Vladimir Putin,”” Trump said in a tweet posted on November 29.

Hungarian Prime Minister Viktor Orban said on November 30 that Budapest stands by Ukraine in the latest escalation of tensions with Russia.

Orban, who is one of the few EU leaders to have good relations with Putin, said Hungary’s position was clear despite the “anti-Hungarian government” in Kyiv.

Hungary and Ukraine are at odds over the rights of the Hungarian minority in Ukraine.

In an interview with the German tabloid Bild published early on November 29, Poroshenko said he hopes European states will take active steps, including increasing sanctions and military protection against Russia, to help Ukraine after providing verbal support in the wake of Russia’s capture of 24 Ukrainian crew members over the weekend.

“We hope that NATO states are prepared to send naval ships to the Sea of Azov to support Ukraine and provide security,” Poroshenko said. He claimed Russian President Vladimir Putin sees himself as a “Russian emperor” and Ukraine as a Russian “colony.”

“The only language he [Putin] understands is the solidarity of the Western world,” Poroshenko said. “We can’t accept Russia’s aggressive policies. First it was Crimea, then eastern Ukraine, now he wants the Sea of Azov.”

Speaking at a German-Ukrainian economic forum in Berlin later on November 29, German Chancellor Angela Merkel said she planned to press Putin at the G20 summit on November 30-December 1 this week to urge the release of the ships and crews.

“We can only resolve this in talks with one another because there is no military solution to all of these conflicts,” she added.

While blaming Russia for tensions, Merkel showed no signs of being ready to back military support.

“We ask the Ukrainian side, too, to be sensible because we know that we can only solve things through being reasonable and through dialogue because there is no military solution to these disputes,” she said.

Peskov on November 29 criticized Poroshenko’s request for NATO to deploy naval ships to the Sea of Azov, alleging it was “aimed at provoking further tensions” and driven by Poroshenko’s “electoral and domestic policy motives.”

Putin has claimed that the naval confrontation was a ploy to boost his Ukrainian counterpart’s popularity ahead of an election in March.

A NATO spokeswoman said the alliance already has a strong presence in the region, with vessels routinely patrolling and exercising in the Black Sea.

“There is already a lot of NATO in the Black Sea, and we will continue to assess our presence in the region,” Oana Lungescu said.

The Sea of Azov is the body of water that separates the Crimean Peninsula, which Russia illegally annexed in 2014, from the Ukrainian and Russian mainlands. Russia opened a bridge over the Kerch Strait connecting Crimea with Russia in May and has asserted control over the strait.

The Kerch Strait is the only route for ships traveling between the Sea of Azov, where Ukraine has several ports, and the Black Sea, which is an arena usually patrolled by NATO.