A Marine veteran has been banned from all Walt Disney World parks after he held a “Trump 2020” banner while on the Splash Mountain ride.

Dion Cini, 49-year-old former Marine and Disney pass-holder, was banished permanently from the park after the Splash Mountain ride camera captured him holding the banner, a stunt which Disney claims incited crowds, according to the New York Post. 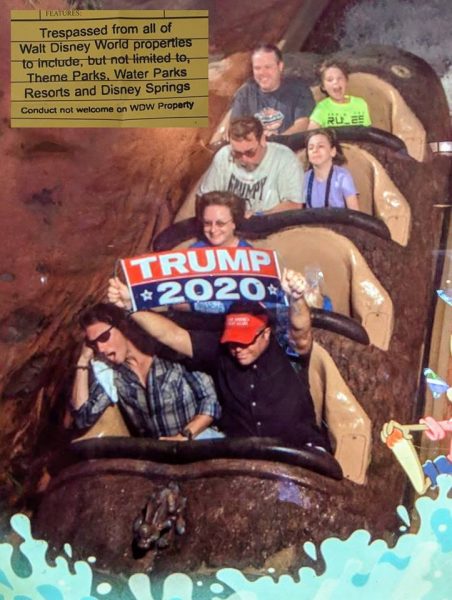 “I held up the sign for two seconds so I can take a picture,” he told The Post. “You’re allowed to hold up signs on Disney rides — cameras, cellphones, and other stuff like that. People have been doing it for years. They just kicked me out ’cause of the context of the sign.”

Immediately after departing the ride, Cini was taken to the side where he was confronted by dozens of Disney employees and two sheriff’s deputies, he told Inside Edition.

“Forty Disney employees escorted me out,” he said.

Cini received an order from the Orange County Sheriff’s Office that banished him from the park.

“Trespassed from all of Walt Disney World properties to include, but not limited to, Theme Parks, Water Parks, Resorts and Disney Springs,” the order said.

His annual pass was revoked “as a result of repeatedly not following park rules.”

A Disney spokesperson told The Post, “Demonstrations and the display of signs and banners is not permitted on the premises.”

“We have previously reminded this guest about our rules,” the spokesperson added.

Disney rules state that “unauthorized events, demonstrations or speeches, or the usage of any flag, banner or sign for commercial purposes, or to incite a crowd” is not allowed on their properties.

It is the second time Cini brought a Trump banner to a Disney park.

Six weeks earlier, Cini unfurled a 20-foot “Trump 2020” banner at the Main Street Railroad Station, a prominent area in the Magic Kingdom park. He was permitted to re-enter the park on the condition that he did not repeat the incident.

“The first time might have been borderline inciting the crowd, and they called me back and said they’d let me in,” Cini explained. “The second time, I just held up a small sign…and I did not incite a crowd. So I actually proved my own theory. That they kicked me out ’cause of the context of the sign and not the policy.”

Cini said there are hundreds of photos online of people holding up signs on Splash Mountain, but he appears to be the only one singled out and banned.

“I just wanted a keepsake for myself,” he said.