Student shot at North Carolina school has died; classmate is in custody

A Butler High student who was shot during a fight on the Matthews campus Monday morning has died, police said.

The suspect in the case is a fellow student, Matthews Police said. The identities of the suspect and victim have not been released.

“The single shooter has been apprehended and the weapon is in the possession of law enforcement,” said a CMS Facebook post.

“Law enforcement has advised that there is no further immediate danger at this time and initial investigation shows this to be an isolated incident.” 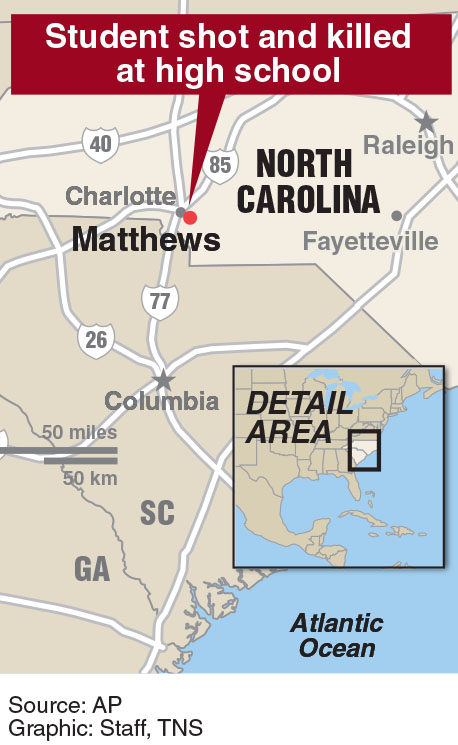 Locator map of Matthews, N. Carolina where student was shot at high school

The wounded student, a male, was taken to Carolinas Medical Center, police said, where he succumbed to his injuries. The shooting occurred after a disagreement between two students, CMS Superintendent Clayton Wilcox said in a news conference outside the school.

The disagreement occurred in a hallway and there were many “young people who witnessed this tragedy,” Wilcox said. “There were many kids in the hallways when this took place,” he said. Both the students involved in the incident attended Butler, he said.

The shooting occurred around 7 a.m. local time, shortly before classes started. A school resource officer was nearby, and “the situation was under control very quickly,” Wilcox said. Surveillance video showed there was a fight between two students and it was “isolated to the hall,” said officials.

Wilcox said school officials were not sure how the suspect was able to get a gun into the school, but noted that not all bags brought onto campus are “actively” searched by the staff.

He added that the district may discover that it “didn’t intervene quickly enough in a bullying situation.”

CMS officials posted on Facebook that counseling is being made available for students and staff at the school. “The Butler High School community and CMS appreciate the support of the entire community during this difficult time,” said the post.

Gov. Roy Cooper said in a statement that he had been in touch with local officials and offered state support.

“As we get more information it is critical that we come together to do everything in our power to prevent these incidents from happening and keep guns out of our schools,” Cooper stated.

Parents were alerted to the incident via a robo call issued by CMS. About 2,100 students attend the school, according to its website.

The school is located just outside Charlotte at 1810 Matthews-Mint Hill Road. WSOC reported live that angry parents were gathering around the campus, despite being told they were to wait for updates at nearby Elevation Church on East Independence Boulevard.

On the periphery of the school, a steady and somber stream of students made their way off campus. Some were accompanied by their parents. Some were not.

They said the shooting occurred after a fight that broke out shortly after the start of the school day.

Several of the departing students said they learned about the incident from Instagram.

Ryan Kenyon, a junior, said when the school went into lockdown, students were told to go to the nearest classroom and to be quiet.

Ryan said they stayed there for 90 minutes, the first block of classes of the day. Students were allowed to go to their normally scheduled second class, he said.

Parent Scott Simpson questioned CMS’ decision to go back to a normal schedule so soon after the shooting. “They’re changing classes during an active crime scene,” he said.

Monday was supposed to be a midterm test day, but the exams were canceled, students said. Parents expressed frustration on not getting information from CMS.

Brenda Kenyon, Ryan’s mother, said police at the scene told parents to gather at nearby Elevation Church. Then they were allowed through the police line and told to go to the school.

Students said hundreds of concerned and shouting parents massed in front of the building, demanding that their children be allowed to leave.

Scott Simpson came to get his ninth grade son, Brody. Rather than come out a main exit, “We made him sneak out a back door. He didn’t feel safe,” the father said.

Brody’s big sister, Bella, now an 11th-grader at the charter Commonwealth High, said Monday’s event validated her decision to leave Butler. “I left because of the bullying and fights,” she says.

There were 47 violent deaths at schools nationwide from mid 2014 to mid 2015, the most recent years of available data.

According to the National Center for Education Statistics, the deaths included 28 homicides, 17 suicides and two by law enforcement officers who were attempting to make an arrest, suppress a disturbance or maintain order.

Thirty-one people were killed in those shootings, including 17 at Marjory Stoneman Douglas High School in Florida and 10 at Santa Fe High School in Texas.

One of the 31 victims was the result of a suicide. Five people were killed at school shootings in 2017 and two in 2016 nationwide, according to Post data. Charlotte schools have witnessed two other shootings since 2003, Post data show.

(Gavin Off and Cassie Cope contributed to this report.)