James Berthold checks on his van on Sunday afternoon, Sept. 16, 2018. Berthold's father was trying to drive to the hospital on Friday night during the height of Hurricane Florence along Nine Foot Road in Newport, N.C., when he became stuck in flood waters and had to evacuate the automobile. (Robert Willett/Raleigh News & Observer/TNS)
September 17, 2018 Lauren Horsch - The Charlotte Observer and Dawn Baumgartner Vaughan - The Charlotte Observer
Share
Tweet
Flip

Seventeen people have died in North Carolina because of Hurricane Florence, and Gov. Roy Cooper urged residents Sunday to beware of treacherous flash flooding for days to come. 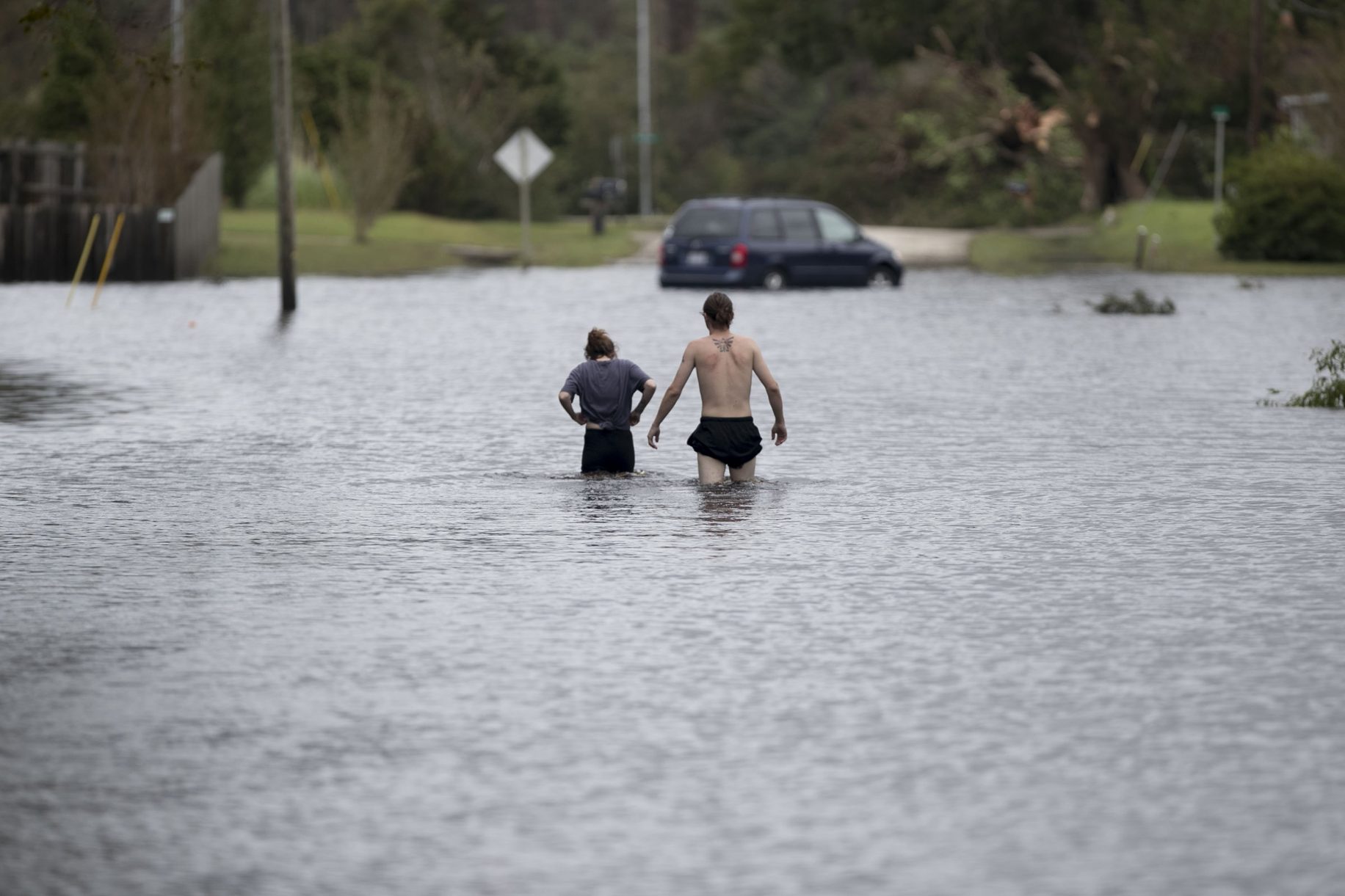 Amanda Mason and Zack McWilliams on Newport, N.C. walk through waist deep water to take a look at their flooded home off of Nine Foot Road on Sunday afternoon, Sept. 16, 2018. They were displaced on Friday night after fast rising water entered their home from a tributary of the Newport River. (Robert Willett/Raleigh News & Observer/TNS)

“Flood waters are still raging across our state,” Cooper said at a noon news conference.

“As this storm continues to churn through North Carolina, it has dumped more than two feet or more in many places,” Cooper said. 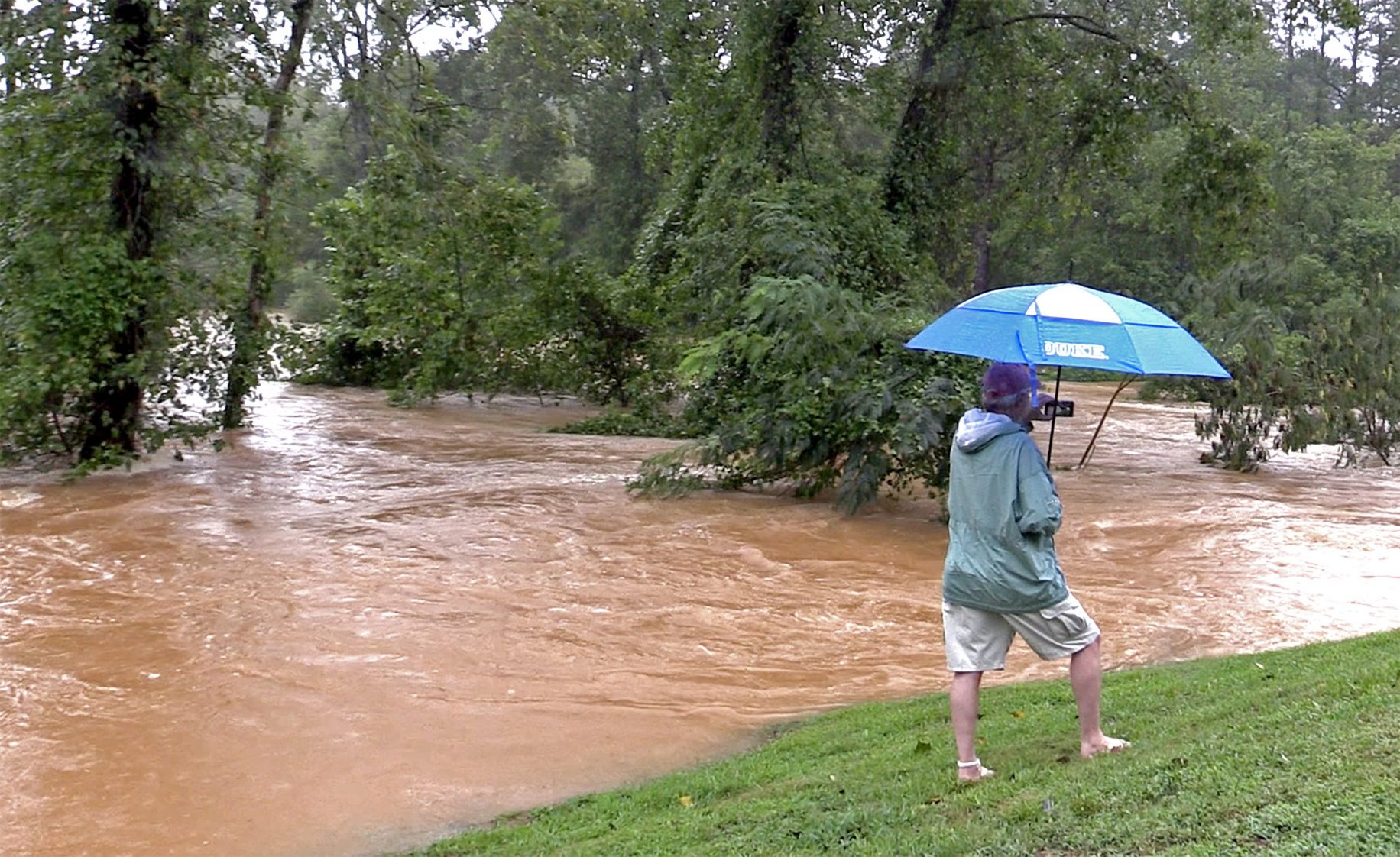 He said that’s enough to inundate areas that have never flooded before.

“Never drive through flooded roads. Just a few inches of water can wash your car away,” the governor warned. 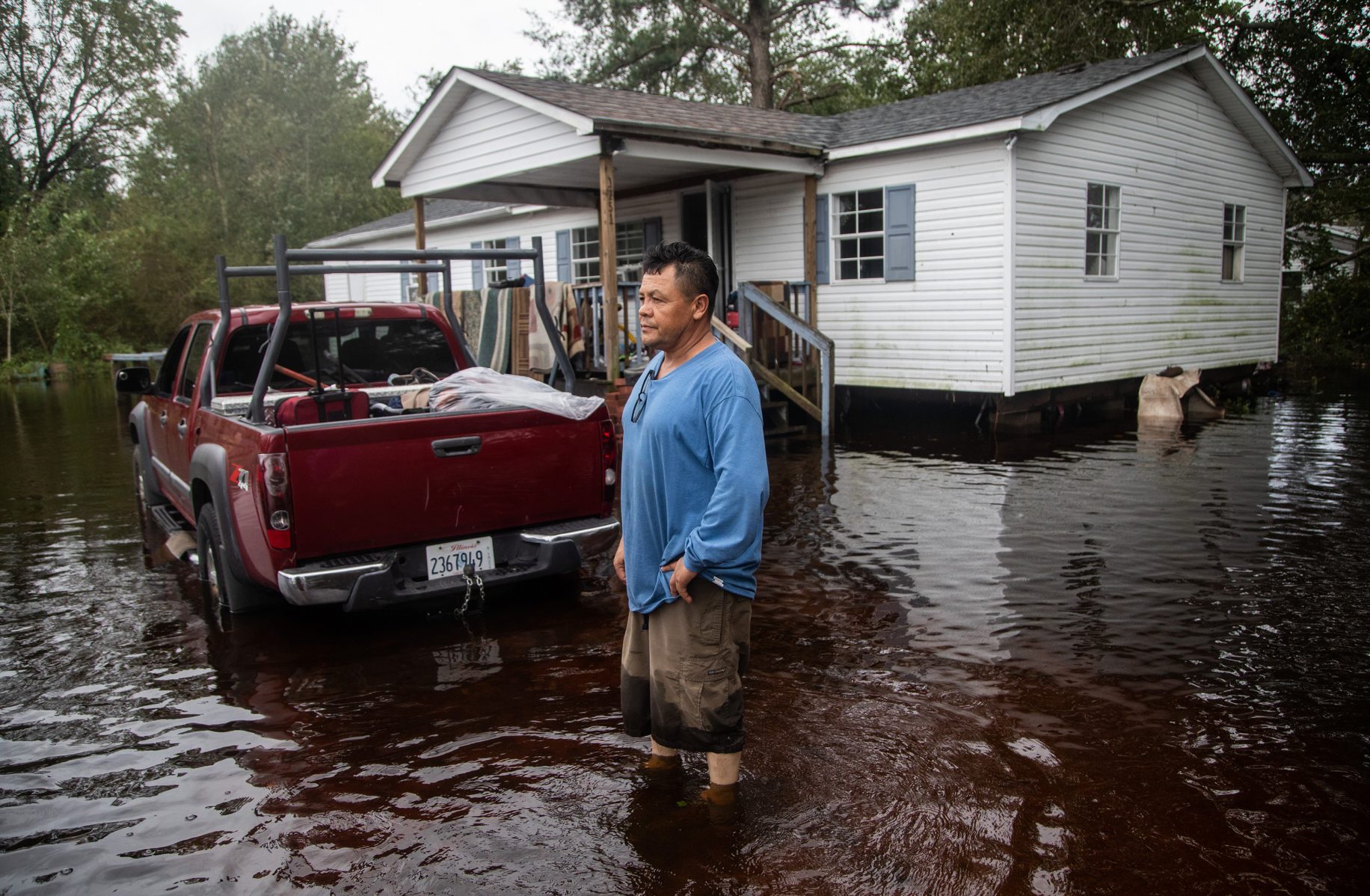 Dorian Gallegos, 15, helps his family move out of a flooded home on Will Baker Road in Kinston on Sunday, Sept. 16, 2018 following the aftermath of Hurricane Florence. Flood levels are expected to rise in parts of Kinston. (Travis Long/Raleigh News & Observer/TNS)

Forecasters expected the heaviest rainfall in the southeast and Sandhills through Sunday night, but said there is a high risk for flash flooding from the coast to the western mountains. Some rivers, including the Cape Fear, Lumber, Neuse, Yadkin and portions of the Rocky River and South Fork of the Catawba River, are expected to crest at new record levels, breaking those set during Hurricane Matthew.

Cooper cautioned people across the state — including those in areas that typically do not experience flooding — to stay alert and heed warnings from emergency officials.

As of Sunday morning, there were more than 600 road closures across the state, the North Carolina Department of Transportation reports. 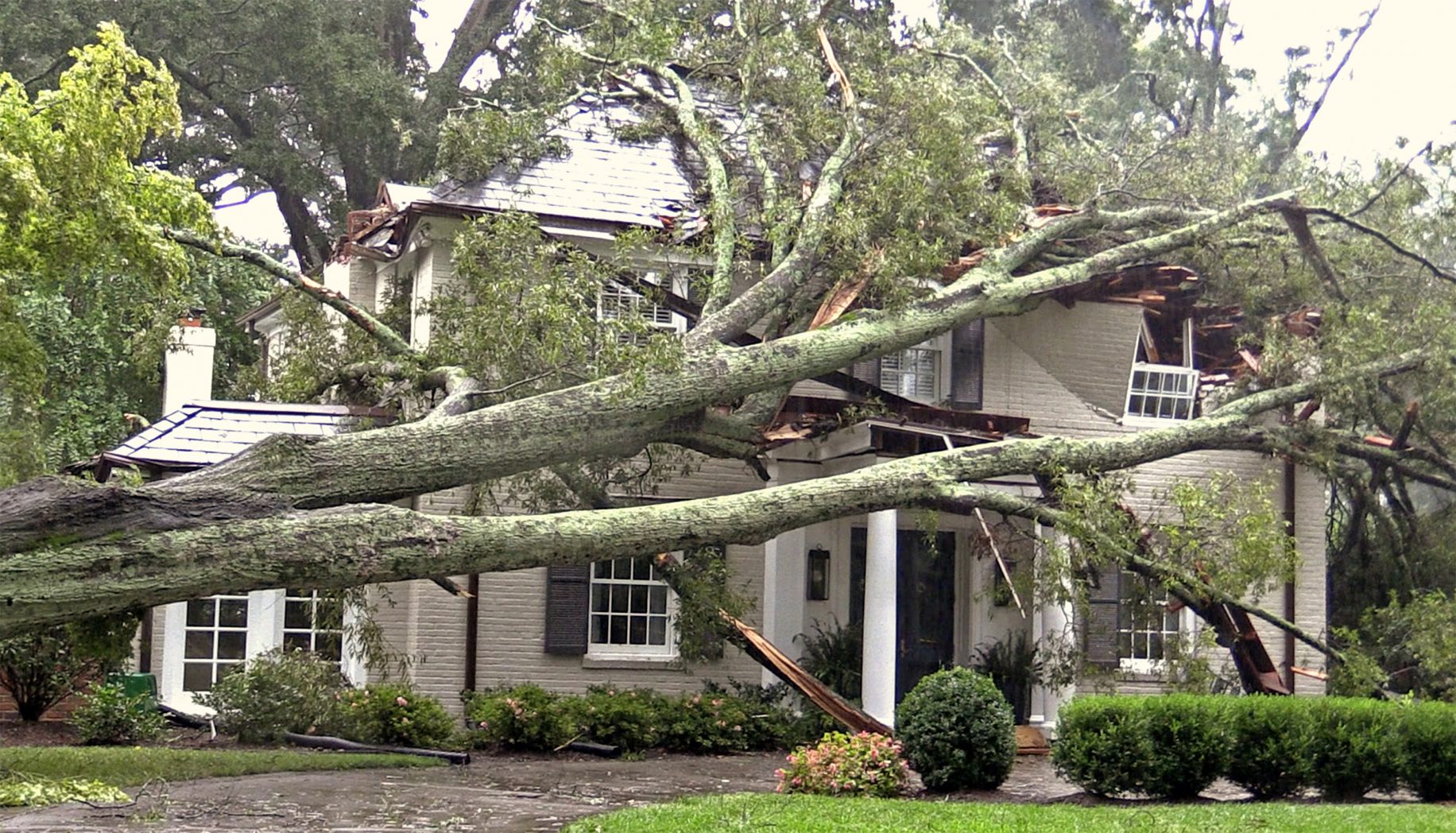 Cooper had just returned from surveying damage in Eastern North Carolina by helicopter with the U.S. Coast Guard.

Rear Admiral Scott Buschman of the U.S. Coast Guard said the Coast Guard has been flying since Friday in “some pretty extreme conditions.”

“We had a number of helicopters out there flying yesterday to rescue folks — we rescued about 50 different people. As of this morning, we have nine helicopters in the area, and dozens of shallow water boats out there assisting people,” Buschman said.

During Cooper’s helicopter tour, he saw that the Cape Fear River’s water is well over its banks, and farmland is underwater, he said.

Cooper expressed concerns for the crops that are now underneath inches of water. Emergency Management Director Mike Sprayberry said the hog lagoons where farmers store hog waste were drawn down and could take “up to 30 inches of rain.”

“We are closely monitoring the hog lagoons with our Department Environmental Quality and Department of Agriculture partners, and we haven’t had any reports of issues at this time,” he said.

Cooper said he mourns what at the time was the loss of 10 lives in North Carolina and “our hearts go out to the victims’ families.” He said that swift water rescues are underway and more than 900 lives had been saved.

Across the state, around 700,000 people remain without power, he said, and many are likely to be without power “for a while.”

Sprayberry said the state is currently involved in a “large-scale search and rescue operation in our coastal counties.” First responders are conducting searches with boats and aircrafts.

Legislators were told that parts of Interstate 95 and Interstate 40 in the eastern part of the state were already overcome with flooding, complicating travel to and from Wilmington. State officials said that residents should not return to any location that is south of U.S. 64 and east of Interstate 73.

Greenville, New Bern, Wilmington, Morehead City, Lumberton and extending west in the coming days along U.S. 74 East from Richmond County over to Wilmington is too hazardous to travel, according to a release from North Carolina House Speaker Tim Moore’s office.

Officials recommend waiting at least until Tuesday or Wednesday, then evaluating the routes again before returning to those areas, the Moore release stated.

Some drivers in North Carolina are being detoured toward Raleigh, Charlotte and Hickory road systems, the release said.

Shelters remain a high priority, Sprayberry said. There are about 15,000 occupants in shelters, but that’s a “number you have a hard time tracking.” Officials are already working to establish temporary housing options once the brunt of the storm has passed.

Officials are expecting tens of thousands of homes to be damaged because of the storm, but the full total won’t be known until the storm leaves.

“In the weeks to come, we will set up disaster recovery centers,” Sprayberry said.

Cooper said once the storm passes and towns start to rebuild, there will be an emphasis on housing that is affordable.

“There’s a concern about affordable housing all over the state, in urban areas but particularly in southeastern North Carolina where we are seeing such significant devastation,” Cooper said. “I know the Department of Emergency Management, Mike (Sprayberry) and I have had significant conversations about that with our partners with how we need to aim toward that goal.”

Areas throughout the state were hit hard by flooding, including those around the Cape Fear, Neuse, Pungo, Lumber, Rocky, Catawba and Yadkin rivers.

On Sunday afternoon the National Weather Service reported the Lumber River at Lumberton was 24 feet, and was expected to crest at 25.7 feet on Monday. It’s already at a major flood level, and will likely eclipse the previous record flood of 24.4 feet in October 2016 during Hurricane Matthew.

The Cape Fear River in Fayetteville is also experiencing major flooding in the wake of Florence. According to the National Weather Service, the river was over 42 feet high on Sunday, and was expected to crest at 65.3 feet on Tuesday. Its record crest was nearly 69 feet in 1945.

Trogdon, the Department of Transportation secretary, said that as of noon Sunday there were 171 primary road closures. That number jumped from Saturday’s total of 60 primary roads closed. Trogdon said two more portions of Interstate 95 had closed overnight Saturday — one near Lumberton and another near Benson. Interstate 40 also had two more closures — near Burgaw and Castle Hayne.

Road access to Wilmington has also been cut off since US-74 in Columbus County closed, Trogdon said.

“We’re working other contingencies to support Wilmington on the ocean side,” he said.

Col. Glenn McNeill, commander of the North Carolina State Highway Patrol, said the patrol responded to 48 collisions and 126 calls for service overnight — most of those for road closures, downed trees and stranded motorists.

The National Hurricane Center said in its 11 a.m. Sunday update that Florence continues to produce widespread heavy rains over much of the Carolinas and flash flooding and major river flooding will continue over a significant portion of North Carolina and South Carolina.

The National Weather Service in Morehead City reported Sunday afternoon that the Trent River at Trenton has exceeded record flooding levels and is at 29 feet. It also reported that the river gauge at Chinquapin in Duplin County was topped by rising flood waters and has become unreliable.

The National Weather Service warned Sunday that the worst is not over yet, even as Florence was downgraded to a tropical depression.

Seventeen people have died in the Carolinas because of the storm, including a 3-month-old in Gaston County on Sunday.