President Donald Trump and first lady Melania Trump will meet Queen Elizabeth II for tea at Windsor Castle on Friday in an encounter that will last less than a hour and involve some of the ceremonial flourish the British do so well.

The Trumps should be impressed, as most American visitors to Windsor usually are. And according to the U.S. ambassador to Britain, it’s a meeting Trump longed for.

He’s spending only a few days in the United Kingdom, including meeting with Prime Minister Theresa May and visiting his golf courses in Scotland, but meeting the monarch is usually the main event.

Will Trump take to Twitter to bash a few more targets, as he has already done at the NATO summit he’s attending in Belgium? Will he stick to the rules – no hugging the queen, please – or will there be a faux pas?

And what will stylish Melania wear? She’s already turning heads in Belgium.

Here’s what to expect, according to Buckingham Palace:

Where it will happen:

Windsor Castle is about a half-hour’s drive west of London, which the Americans want to avoid due to the expected anti-Trump protesters in the capital city.

The castle is the world’s oldest (more than 900 years old) and largest inhabited royal castle in the world, a massive (nearly 500,000 square feet) fortress built by William the Conqueror and occupying 13 acres. 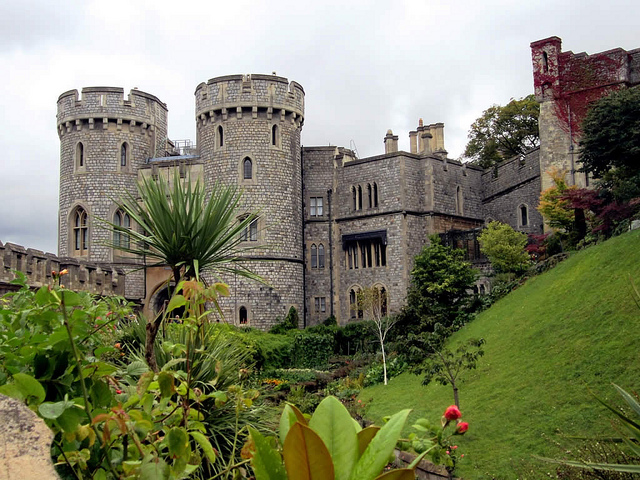 Windsor Castle on the Thames River west of London, England, is the official residence of Elizabeth II. The Norman Gateway shown here dates back almost a thousand years. (David Stanley/Flickr)

It’s also the queen’s favorite royal residence and where she spends most weekends when she is in London. (Buckingham Palace, with about 600 rooms, is her weekday work home.)

In May, Windsor’s St. George’s Chapel was the scene of her grandson Prince Harry’s wedding to former American actress Meghan Markle, now the Duke and Duchess of Sussex, a spectacular royal celebration watched around the world. 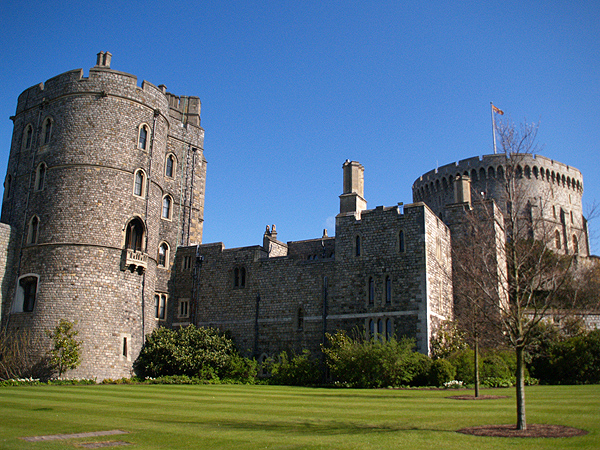 The Trumps will shake hands with the 92-year-old monarch. Her husband, Prince Philip, 97, who has retired from public life, is not expected to join them. 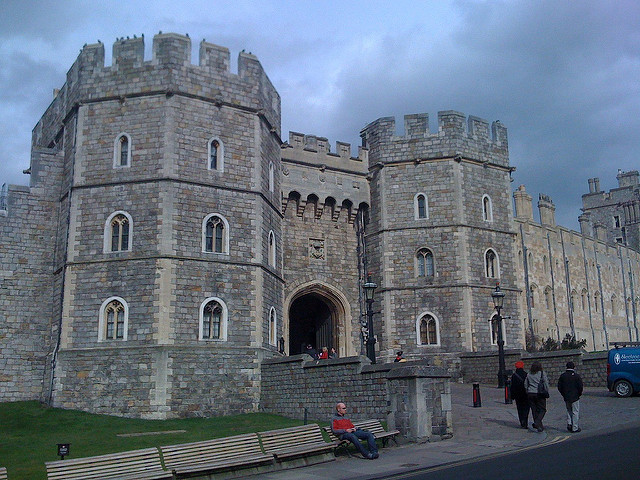 British men usually bow their heads and British women curtsy when meeting the queen, but they don’t have to, and Americans and other nationalities don’t have to, either.

Palace officials usually tell newcomers to relax – the days of “off with ‘is ‘head!” are over. On the official website of the British monarchy, the advice is pretty simple: Be polite.

“There are no obligatory codes of behaviour when meeting The Queen or a member of the Royal Family, but many people wish to observe the traditional forms.”

Her Majesty will welcome the Trumps in the Quadrangle of the castle, the large open area surrounded by Clarence, Queen’s, Augusta, York and Lancaster Towers and the King George IV Gate.

A Guard of Honor, formed of the Coldstream Guards, will give a Royal Salute (“God Save the Queen”) and then the American national anthem will be played.

Trump, who is known to appreciate military flourish, will be pleased to see the Coldstream Guards, the oldest continuously serving regiment in the British Army. It’s an elite infantry unit but it’s also justly famous for its high-profile ceremonial duties, such as parading for the monarch.

Then the queen and the president will inspect the Guard of Honor before watching the military march past.

The Trumps will then join the queen inside the castle for tea.

Buckingham Palace did not specify in which room – the castle has about 1,000 – but the queen’s sitting room is a possibility.

It is known that President Trump is a teetotaler; it’s not clear if he’s a tea drinker.

How often does the queen receive presidents at Windsor Castle?

According to the palace, she’s received three other U.S. presidents at the castle since 1982, the most recent being President Barack Obama and first lady Michelle Obama in 2016 when she hosted a private lunch there for the presidential couple. (Later, the Obamas had dinner with Prince William and Duchess Kate of Cambridge at Kensington Palace, where they met little Prince George.)

The queen received President George W. Bush and first lady Laura Bush in 2008, and she hosted President Ronald Reagan and first lady Nancy Reagan in 1982. The queen and Reagan, both skilled riders and horse fans, went for a canter in the private Home Park of the castle.

How many presidents total has the queen met?

Trump is 12th American president out of 13 serving presidents the queen has met in her 66 years on her throne. (President Lyndon Johnson was the only one she’s missed meeting.)

6 killed over 24 hours in Chicago, 10 others wounded by gunfire