West Point graduate and now former Army infantry officer Spenser Rapone has been processed out of the U.S. Army and received an other than honorable discharge from the military after a photo he posted with his West Point cap and the words “Communism will win” went viral.

Rapone came under fire last year for his social media posts of socialist and communist content. He went viral after posting a photo to Twitter of himself in support of professional football player Colin Kaepernick, where Rapone is seen in his West Point uniform at graduation holding his cap that contains a piece of paper that says “Communism will win.”

After posting the photo, Rapone was discovered to be a vehement communist propagandist and “official socialist organizer” of the Democratic Socialists of America (DSA). Rapone’s social media was filled with up to hundreds of posts, messages and photos that were being circulated around the military and civilian communities.

Rapone had also posted a second photo of himself in uniform, and he is seen wearing a Che Guevara T-shirt underneath his uniform jacket. Guevara was an Argentine Marxist revolutionary who believed the poor people of Latin America would be saved by communism. 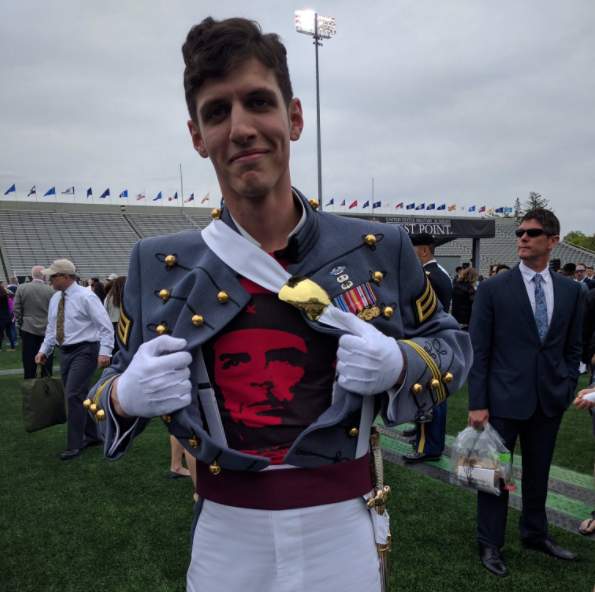 Rapone was an infantry officer in the 10th Mountain Division at Fort Drum, N.Y. He has deployed to Afghanistan and received a combat infantryman badge (CIB).

An other than honorable discharge means Rapone will not be entitled to VA benefits or the GI Bill.

Today, his Twitter account is again public. Rapone, whose Twitter handle is “punkproletarian,” recently retweeted posts from Rory Fanning, an ex-Army Ranger who says he will be interviewing Rapone at the conference “Socialism 2018.”

At Socialism 2018 I’ll be sitting down with with Spenser Rapone, the US Army Ranger, Afghan-war combat vet, recent West Point graduate, and now war-resister, who sparked nation-wide fury after publicly supporting Colin Kaepernick and Socialism during his West Point graduation. pic.twitter.com/BIPzfEHmoP

Rapone is listed as one of the speakers for Socialism 2018, which is slated for early July in Chicago.

According to his bio on the website, Rapone “could no longer stomach the immorality of U.S. imperialism, he spoke out against the reprehensible actions of the military in September 2017. He ultimately resigned his commission, and was separated from the Army in June 2018 with an Other Than Honorable discharge.”

Fanning wrote that their conversation will be called “Resisting Within the Ranks.”

“Spenser is being discharged from the military with an Other Than Honorable discharge this June, in part, because [Marco] Rubio penned a panic-stricken letter to acting Secretary of the Army Ryan McCarthy demanding … the branch nullify Rapone’s military commission after seeing this photo,” he wrote.

Our conversation will be called “Resisting Within the Ranks.”

Spenser Is being discharged from the military with an Other Than Honorable discharge this June, in part, because Maro Rubio penned a panic-stricken letter to acting Secretary of the Army Ryan McCarthy demanding…

Florida Senator Marco Rubio called on the U.S. Army to remove Rapone and make him pay back his tuition for “advocating for communism.”

U.S. Army spokesperson Valerie Mongello had told American Military News that while the Department of Defense and Army encourage soldiers to “participate in the democratic process,” the Army “has strict rules regarding the wear and appearance of Army uniforms.”