While the Taliban has since said it still controls the city, despite being defeated, the Pentagon has refuted those claims.

“Our Afghan partners’ success in places like Farah are a testament to the tremendous improvements in the Afghan National Army, Afghan special security forces and the Afghan air force,” White said, also noting that Afghan A-29s and MI-17s conducted multiple airstrikes during the offensive in Farah.

The U.S. sent A-10 Warthog attack planes and MQ-9 Reaper drones to keep eyes on the Taliban as they attacked the city. Afghan A-29s and MI-17 helicopters were also sent to conduct airstrikes on the Taliban. 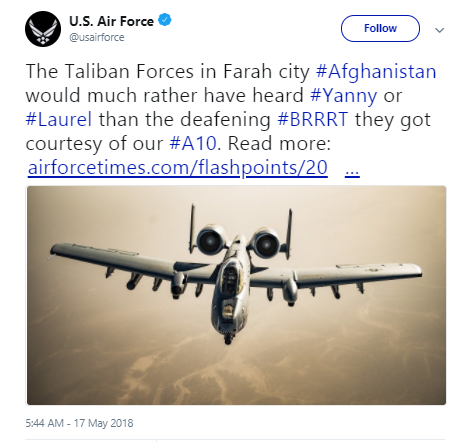 The MQ-9 reapers conducted airstrikes on the Taliban, killing an estimated 28 fighters.

Footage of the airstrike was released:

By Wednesday night, the majority of the fighting had subsided after the Taliban attacked checkpoints north and west of Farah early Wednesday. The government is back in control, according to a Coalition spokesman.

“The situation is not concerning, and with the arrival of Commando forces, they will be defeated, Inshallah [God willing],” Farah province Governor Basir Salangi told Tolo News.

According to the Taliban, they at one point controlled an intelligence headquarters but were unable to penetrate the city center.

The Taliban took pictures and video of themselves at one point in control of several checkpoint areas and parts of the city.

Salangi said about 300 Taliban insurgents had been killed while roughly 25 Afghan security forces were killed in the attack.

The Taliban controls much of Farah province, which is used on a drug route from Iran to Taliban areas in Helmand province.

Hundreds of police and soldiers have been killed in recent months in Farah province as a result of fighting the Taliban.

“Security forces will follow the enemy in the districts, as well, and military operations will continue until the Taliban are defeated in the province,” Salangi said. “The Taliban will pay the price for attacking Farah.”

“They go in. They get a splash, but they are not able to hold the terrain,” O’Donnell said. “I absolutely do think that we are in a different stage.”

“Your heroic security forces are not just fighting for your country, but they are also fighting on behalf of all humanity, against international terrorism,” he said.