The new U.S. Embassy in Jerusalem is slated to be inaugurated on Monday, with the ambassador and his core staff being the first to make the move from Tel Aviv to the American consulate in Arnona.

The inauguration will be attended by high-ranking Israeli officials and members of the Trump Administration, including Secretary of the Treasury Steven Mnuchin, Ivanka Trump and Jared Kushner, Y Net News reported.

Construction of the new Embassy will likely take at least six years. For now, officials will utilize the existing consulate building in Arnona, a neighborhood in the southern part of the city, which is in the process of being renovated.

Interior and exterior changes, as well as improved security measures, are already in place, including plans for a 3-meter high perimeter wall and paved escape route. 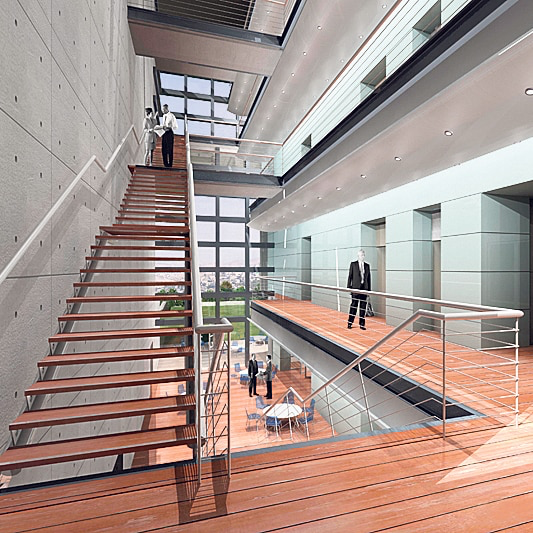 The first phase of constructions allows for the U.S. ambassador and a small selection of his staff to utilize the new space for meetings and daily activities, but will not yet allow for a permanent residence.

Over the next three years, additional floors will be added in order to house Embassy employees coming in from Tel Aviv.

The Embassy has also reached out for help in locating additional nearby properties that can be rented in order to accommodate more people.

The new U.S. Embassy building will likely be planned by an American company in coordination with Israeli teams. The building is slated to be a five-story structure at the center of a 25,000-square-meter complex.

A rendering of the new exterior of the existing consulate building in Arnona. (Amir Mann, Rendering/Ami Shinar Architects & Planners)

Jerusalem Mayor Nir Barkat also announced this week his intention to formally name the square near the U.S. Embassy site the “United States Square in honor of President Donald Trump.”

Barkat commended the President’s decision in moving the Embassy to Jerusalem in a press release on Tuesday.

“This is the way in which Jerusalem returns love to the President and residents of the United States who stand by the state of Israel,” the mayor said, according to the Jerusalem Post. “President Trump decided to recognize Jerusalem as the capital of the Jewish people, stand on the side of historical truth and do the right thing.”

Until construction of the new complex officially begins, next week’s inauguration is largely symbolic and legitimizes the President’s decision to declare Jerusalem as Israel’s capital city.