A UK oddsmaker said that President Trump is currently the front-runner with 2/1 odds to receive the 2019 Nobel Peace Prize, according to Ladbrokes, a U.K. betting company.

Last week, North Korean dictator Kim Jong Un and South Korean president Moon Jae-in met during a historic summit between the two countries where they vowed to denuclearize the Korean Peninsula and bring about an end to the hostilities between them.

“The United States has never been closer to potentially having something happen with respect to the Korean Peninsula that can get rid of the nuclear weapons, can create so many good things, so many positive things, and peace and safety for the world,” Trump said Monday.

South Korean President Moon Jae-in praised Trump for his involvement in the warming of relations between North and South Korea.

Moon said Monday that President Trump should win the Nobel Peace Prize for his role.

“President Trump should win the Nobel Peace Prize. The only thing we need is peace,” Moon said. 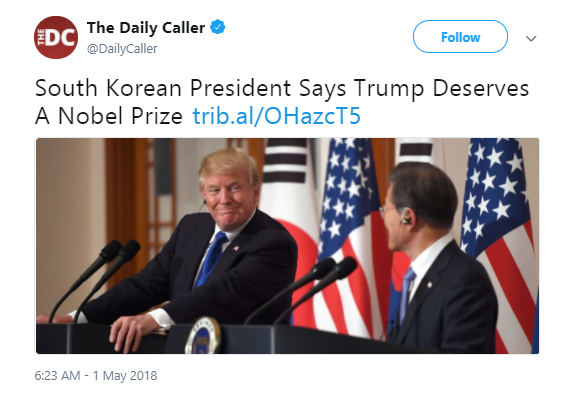 President Trump and Kim Jong Un are also planning to meet one another in the coming weeks to further discuss warming of relations and denuclearization.

“Maybe it will be wonderful. And maybe it won’t,” Trump said last week. “And if it’s not going to be fair and reasonable and good, unlike past administrations, I will leave the table.”

“President Trump, if he can lead us to ending the Korean War after 70 years and [getting] North Korea to give up [its] nuclear program in a verifiable way, deserves the Nobel Peace Prize and then some,” Graham told Fox News.