Eighteen House Republicans have formally nominated President Trump for the 2019 Nobel Peace Prize, as they recently sent a letter to the Norwegian Nobel Committee.

The letter, led by Rep. Luke Messer, nominated President Trump for his work in ending the Korean War, which the Koreas have said will be declared later this year, and denuclearizing the Korean Peninsula, another effort leaders from North and South Korea said is to take place. 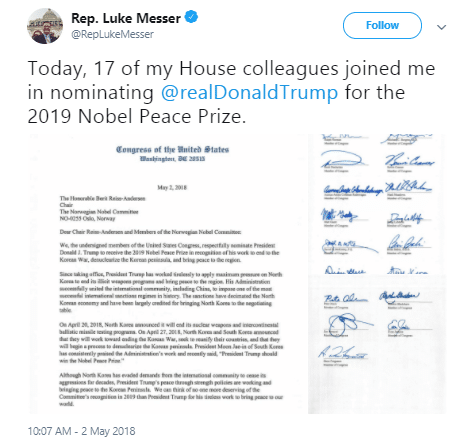 The lawmakers praised Trump for putting pressure on North Korea and uniting the international community to impose sanctions on the country.

“Since taking office, President Trump has worked tirelessly to apply maximum pressure on North Korea to end its illicit weapons program and bring peace to the region,” the letter reads. “His Administration successfully united the international community, including China, to impose one of the most successful international sanctions regimes in history. The sanctions have decimated the North Korean economy and have been largely credited for bringing North Korea to the negotiating table.”

Messer first pushed for Trump to receive the Nobel Peace Prize in March, but following recent developments on the Korean Peninsula, Messer and House lawmakers decided to formally nominate Trump.

“Although North Korea has evaded demands from the international community to cease its aggression for decades, President Trump’s peace through strength policies are working and bringing peace to the Korean Peninsula,” the letter reads. “We can think of no one more deserving of the Committee’s recognition in 2019 than President Trump for his tireless work to bring peace to our world.”

“President Trump should win the Nobel Peace Prize. The only thing we need is peace,” Moon had said.

President Trump and Kim Jong Un are planning to meet with one another in upcoming weeks.

“Maybe it will be wonderful. And maybe it won’t,” Trump has said. “And if it’s not going to be fair and reasonable and good, unlike past administrations, I will leave the table.”

“President Trump, if he can lead us to ending the Korean War after 70 years and [getting] North Korea to give up [its] nuclear program in a verifiable way, deserves the Nobel Peace Prize and then some,” Graham told Fox News.