During Secretary of State Mike Pompeo’s latest trip to Pyongyang to discuss the historic upcoming meeting between President Trump and Kim Jong Un, new photos were taken of the pair shaking hands with one another.

The White House had released photos of the pair’s first meeting over Easter, when Pompeo was still CIA Director and had not yet been confirmed as Secretary of State. 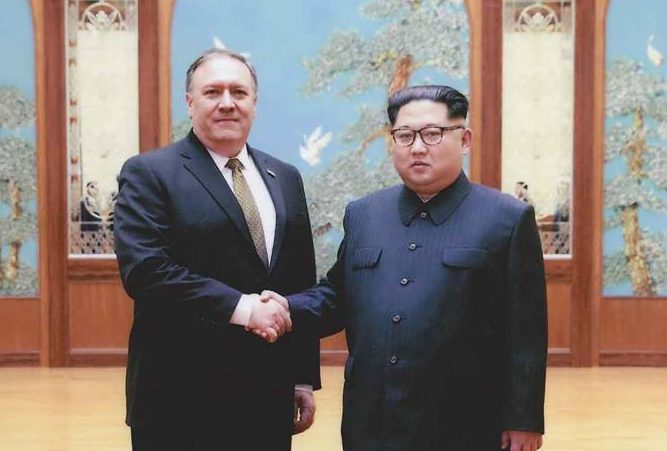 In the latest photo, the pair seem to be more jovial and smiling.

Pompeo and Kim met this week to discuss the upcoming U.S.-North Korea summit, which Trump confirmed Thursday would take place on June 12 in Singapore.

Pompeo was also in North Korea to secure the release of three Americans who had been detained there, and take them back to the U.S.

The day before, Trump had announced that Pompeo was traveling to North Korea, this while he also announced his decision regarding the Iran nuclear deal.

“I really think he wants to do something, and bring that country into the real world,” Trump said Thursday. “I really think a lot of progress has been made… Some great things can happen.”

“We thank God, and all our families and friends who prayed for us and for our return. God Bless America, the greatest nation in the world,” the three men said in a statement released by the State Department.