Missile strikes Sunday night on two military outposts in northern Syria killed a number of pro-Assad fighters, many who were Iranians, according to a conflict monitoring group, the BBC reported this week.

While it is unknown who carried out the missile attacks, it is speculated that Israel was behind them. There is no official confirmation on how many people were killed, but it is believed to be more than two dozen.

According to the Syrian military, facilities in Hama and Aleppo were hit by the missiles.

The Syrian Observatory for Human Rights (SOHR) said 26 pro-government fighters were killed, including many Iranians. The monitoring group added that a depot for surface-to-surface missiles at the 47th Brigade military base was targeted in the missile strike.

A cache of missiles was destroyed and could be seen exploding, the BBC said. 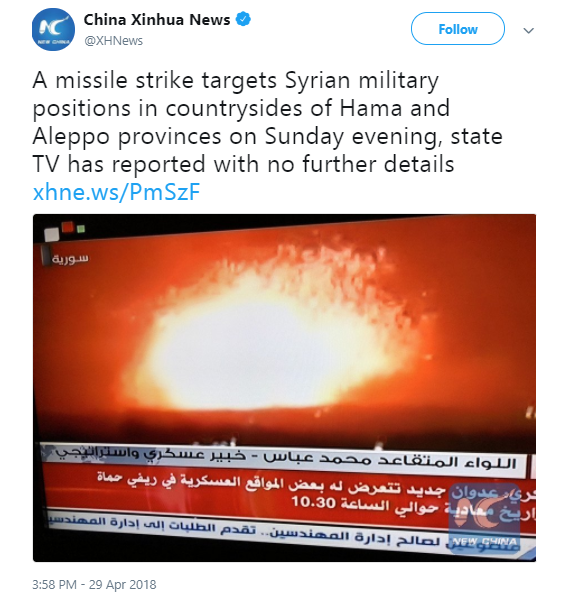 The number of those killed in the attack could rise, as several dozen more were wounded and some have gone missing.

Opposition media activist Mohammed Rasheed told the Associated Press that residents in the Hama area fled their homes due to flying debris as a result of the explosions.

The European-Mediterranean Seismological Center reported a 2.6-magnitude earthquake as a result of the missile strikes.

Iranian news agencies have given conflicting reports on the number of Iranians killed in the missile strike. One agency said that 18 were killed while others claim that no Iranians were killed.

The missile strikes came just hours after Israeli Prime Minister Benjamin Netanyahu spoke with President Donald Trump to discuss the challenges that the Middle East faces, as well as “the Iranian regime’s destabilizing activities,” the White House said in a statement.

“We remain deeply concerned about Iran’s dangerous escalation of threats to Israel and the region, and Iran’s ambition to dominate the Middle East remains,” Pompeo said following a Sunday meeting with Netanyahu. “The United States is with Israel in this fight.”

Tensions are especially high between Israel and Iran following an airstrike on Syria’s T4 air base in Homs province that killed seven Iranian personnel. Iran vowed to respond to the attack.

President Trump also has a May 12 deadline to decide whether to pull out of the 2015 Iran nuclear deal.