A number of Illinois counties have passed resolutions declaring themselves as “sanctuary” counties for gun owners in an effort to stop the state legislature from pushing gun control measures, the Associated Press reported.

If the state legislature passes gun bills in Illinois – such as increasing the minimum age for owning a gun, a limit on magazine capacity or a bump stock ban – these Illinois counties would prevent their employees from enforcing such laws.

Effingham County’s top prosecutor Bryan Kibler told the Associated Press that the resolutions passed by the counties are mostly symbolic and are sending a message similar to those cities that do not cooperate with federal immigration authorities, such as Chicago.

“We wanted to… get across that our Second Amendment rights are slowly being stripped away,” he added. 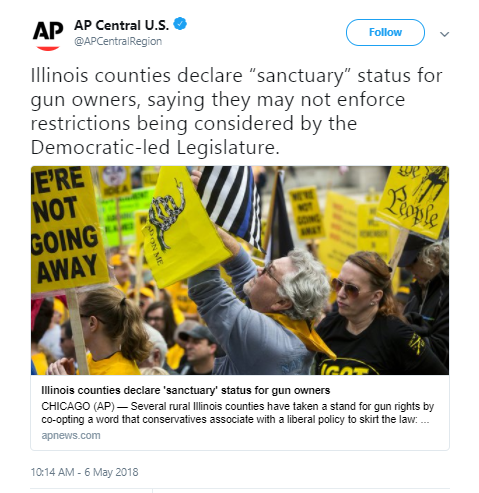 “It’s a buzzword, a word that really gets attention. With all these sanctuary cities, we just decided to turn it around to protect our Second Amendment rights,” said David Campbell, vice chairman of the Effingham County Board.

So far, at least five counties have passed resolutions declaring themselves sanctuary counties.

At least another 20 Illinois counties, as well as counties from Washington and Oregon, have asked for copies of Effingham County’s resolution.

County officials don’t believe the resolutions will be enough to stop the state legislature from passing any gun control measures because the legislature is mostly made up of lawmakers in the Chicago area.

“I don’t think you can say, ‘I don’t agree with the law so I won’t enforce it,'” said Kathleen Willis, a Democratic state representative. “I think it sends the wrong message.”