Eight members of a group of Central American migrants seeking asylum in the United States were admitted Monday night into the San Ysidro Port of Entry, according to leaders of the Pueblo Sin Fronteras Caravan that brought them to the Tijuana-San Diego border. 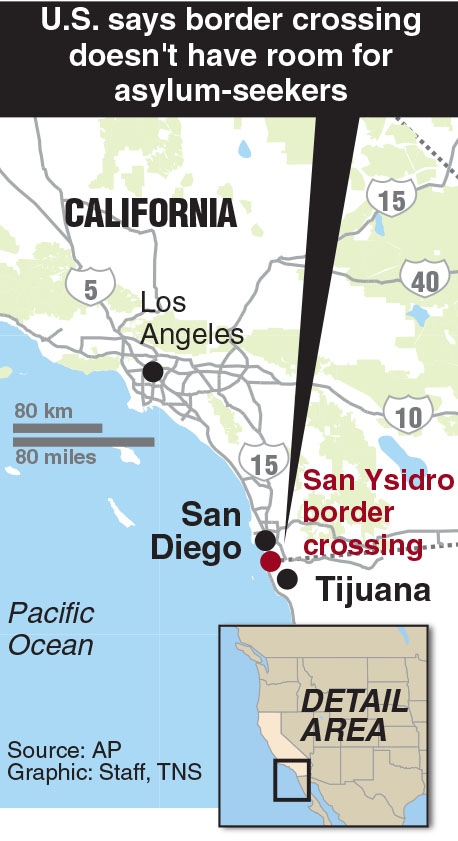 They were the first to be allowed through since a group of caravan members arrived at the border Sunday afternoon to apply for asylum.

Word of their passage came as U.S. Customs and Border Protection announced that it was again accepting asylum seekers and others without documents after a hiatus of close to 27 hours.

Just as members of the Pueblo Sin Fronteras Caravan had prepared to present themselves at the border to ask for asylum, CBP had announced Sunday afternoon that its facilities were full and that it did not have the capacity to accept them.

On Monday morning, some 20 members of the caravan, most of them women with small children, spread out on blankets at the door to the port’s PedWest entrance, watching as northbound pedestrian crossers filed past at a rapid clip, heading to jobs, school and shopping excursions.

“I feel that God will help me cross, and will touch the president’s heart,” said Jose Cristobal Amaya, 16, among the small group waiting at the PedWest door.

The Honduran teenager, who was traveling alone, said he was fleeing gang members he calls Los Mareros who beat his father and threatened to kill his entire family.

The eight caravan members to go through were from this group, with mothers and children the first to be selected, according to a spokesman for Pueblo Sin Fronteras: three mothers, four children, and an 18-year-old were in the initial group.

The spokesman said that they will remain detained at the port until they receive a “credible fear” interview, an initial screening that launches the asylum process.

Meanwhile a larger group of caravan members continued waiting, spread farther from the PedWest entrance in an open area outside El Chaparral, Mexico’s federal port that connects to San Ysidro.

Attorneys who have been assisting them have said that up to 200 participants had been preparing to apply for asylum.

President Donald Trump has made it clear that he does not look kindly on the caravan. He has tweeted that he instructed the secretary of Homeland Security “to not let these large caravans of people into our country.”

On Monday night the U.S. Department of Justice announced it had filed charges against 11 suspected caravan members, accusing them of entering the country illegally.

The suspects were arrested by members of the Border Patrol in areas west of the San Ysidro Port of Entry.

“When respect for the rule of law diminishes, so too does our ability to protect our great nation, its borders, and its citizens,” Attorney General Jeff Sessions said in a statement.

But caravan leaders said Monday they had no knowledge that any of its members were arrested.

Outside the port Monday, caravan participants said they were determined to apply for asylum in the United States and were prepared to wait.

The caravan has come under much scrutiny as it crossed Mexico to the U.S. border, swelling to as many as 1,700 members, according to organizers, with the majority from Honduras.

The caravan left Tapachula on the Guatemalan border on March 25, with those most determined to seek asylum in the United States now gathered in Tijuana.

“They can’t leave them sitting indefinitely, you’ve got to think there’s a plan there,” said Andrew Selee, president of the Migration Policy Institute in Washington, D.C. “Because the United States is a country of laws, they will have to process them, even if it goes slowly.”

Selee said the delay also shows a need to come up with a new approach.

“Our border policies were set up for a time when it was mostly economic migrants coming across,” Selee said. As growing numbers of asylum applicants show up at ports of entry, he said. “we haven’t re-thought our border policies to deal with these new flows.”

Caravan members said they were prepared to wait it out.

“After days on a train, after so much struggle, this is the easiest part,” said Irineo Mujica, a U.S. citizen who heads Pueblo Sin Fronteras, which also operates two migrant shelters in the state of Sonora.

But while members of the caravan wait, so are other asylum seekers, and they have been growing increasingly upset, complaining that caravan members were trying to enter ahead of people who have been waiting for more than a week.

“The ones from the caravan are trying to break the line,” said Rene Garcia, who said he is from the state of Michoacan, and had been waiting for eight days for a chance to walk up to the port and present himself for asylum. Others in the group include Hondurans, Venezuelans and Haitians, he said.