Congressman wants to confiscate and ban all ‘assault weapons’ in US

A Democratic congressman has called for the seizure of all “military-style semiautomatic assault weapons” and the prosecution of all of those who refuse to do so. 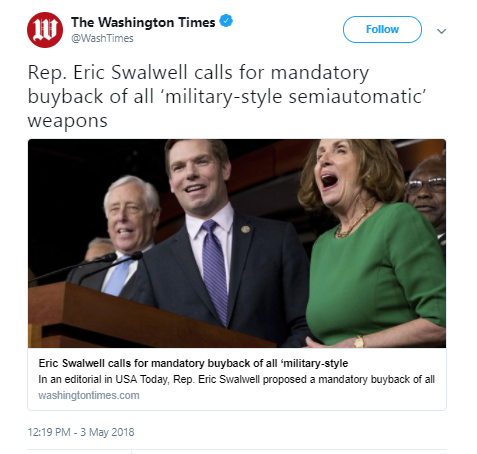 “Reinstating the federal assault weapons ban that was in effect from 1994 to 2004 would prohibit manufacture and sales, but it would not affect weapons already possessed,” Swalwell wrote. “This would leave millions of assault weapons in our communities for decades to come.”

“Instead, we should ban possession of military-style semiautomatic assault weapons, we should buy back such weapons from all who choose to abide by the law, and we should criminally prosecute any who choose to defy it by keeping their weapons,” Swalwell wrote.

Swalwell said that he and other Democrats should be following the lead of the survivors of the Parkland shooting.

“There’s something new and different about the surviving Parkland high schoolers’ demands,” he wrote. “They dismiss the moral equivalence we’ve made for far too long regarding the Second Amendment. I’ve been guilty of it myself, telling constituents and reporters that ‘we can protect the Second Amendment and protect lives.’”

“The Parkland teens have taught us there is no right more important than every student’s right to come home after class,” Swalwell added. “The right to live is supreme over any other.”

Swalwell pointed out that his plan would be similar to Australia’s buy-back program.

“Based on manufacturing figures and other indirect data, there could be 15 million assault weapons out there,” he wrote. “If we offer $200 to buy back each weapon — as many local governments have — then it would cost about $3 billion; at $1,000 each, the cost would be about $15 billion.”