The installment of missile systems would be the first of its kind in the Spratly Islands in the South China Sea, where other nations – including Brunei, Malaysia, the Philippines, Taiwan and Vietnam – dispute the territorial waters, CNBC reported.

China has denied the claim that it is militarizing the artificial islands in the South China Sea and that its development of the islands is for defensive purposes only.

The missile systems were installed on Fiery Cross Reef, Subi Reef and Mischief Reef within the past 30 days, CNBC reported. 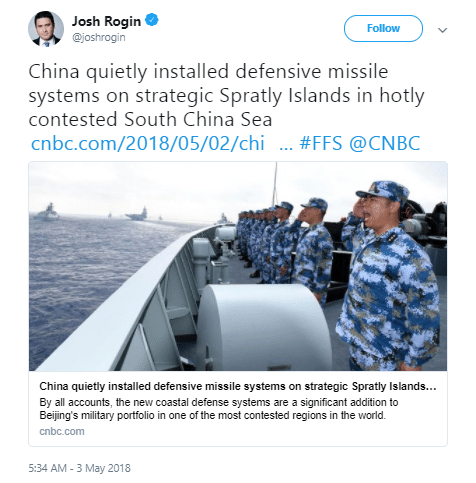 The YJ-12B anti-ship cruise missiles are capable of engaging surface vessels within 295 nautical miles of the reefs, while the HQ-9B surface-to-air missiles have a range of 160 nautical miles, CNBC reported.

“We have consistently called on China, as well as other claimants, to refrain from further land reclamation, construction of new facilities, and militarization of disputed features, and to commit to managing and resolving disputes peacefully with other claimants,” a Pentagon official told CNBC. “The further militarization of outposts will only serve to raise tensions and create greater distrust among claimants.”

China’s installment of missile systems on the Spratly Islands comes amid another move by the country that is a cause for concern in the region.

“While China has maintained that the construction of the islands is to ensure safety at sea, navigation assistance, search and rescue, fisheries protection and other nonmilitary functions, electronic jamming equipment is only for military use,” a U.S. Defense Department official told the Wall Street Journal.

While the U.S. routinely conducts maritime training drills in the South China Sea, military presence in the region is regularly contested. China lays claim to a number of disputed islands and territories, which often results in touchy situations during routine drills. China asserts its exclusive territorial claims and sovereignty in the South China Sea.

Even with China continually on edge, the U.S. has reaffirmed that it will continue to not only keep a noticeable presence, but also conduct drills as needed.

“The only thing lacking are the deployed forces. Once occupied, China will be able to extend its influence thousands of miles to the south and project power deep into Oceania,” Davidson said. “In short, China is now capable of controlling the South China Sea in all scenarios short of war with the United States.”