Canadians who joined ISIS have ‘right to return’ to Canada, documents say

Canadians who joined ISIS in the Middle East and want to return to Canada have a “right to return,” according to documents obtained by Global News through the Access to Information Act. 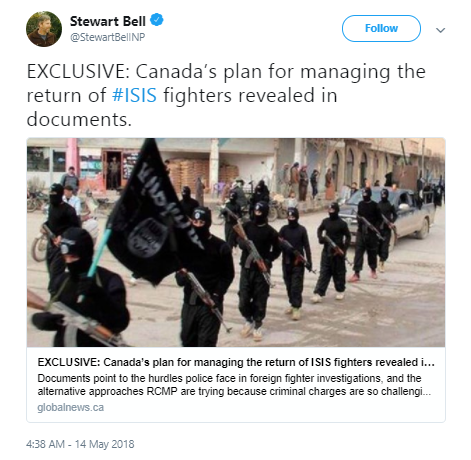 Canadian Prime Minister Justin Trudeau thinks former ISIS terrorists who are returning to Canada will have an “extremely powerful voice” in helping prevent future radicalization, it has previously been reported.

Trudeau late last year sat down and did a year-end interview with Canada’s CTV News, and he was asked about returning ISIS fighters.

He thinks the likelihood of former terrorists reintegrating is “pretty remote,” Trudeau said.

According to the documents recently obtained, terrorism investigations are some of the most difficult challenges the Royal Canadian Mounted Police (RCMP) faces due to activity in foreign conflict zones and a lack of evidence.

“Often, they require evidence of an individual’s activity in foreign conflict zones, or rely on information provided by partners that we are not authorized to disclose in court,” the documents say. “The RCMP also faces challenges in collecting digital evidence, including access to encrypted communications.”

Because of the lack of evidence to charge the individuals, they have to “mitigate the threat through efforts outside the criminal justice system,” according to the documents.

According to a Briefing Note prepared for Public Safety Minister Ralph Goodale, Canadians who go abroad and commit terrorism for ISIS have a “right to return.”

“Therefore, even if a Canadian engaged in terrorist activity abroad, the government must facilitate their return to Canada,” the document says.

The High Risk Returnee Interdepartmental Task Force was established to handle the return of terrorists to Canada.

Because known foreign fighters have had their passports cancelled, they have to visit a Canadian diplomatic outpost, allowing the RCMP time to determine what to do with them before they can enter back into the country.

“The task force allows us to collectively identify what measures can mitigate the threat these individuals may pose during their return to Canada,” an RCMP document says. “This could include sending officers overseas to collect evidence before they depart, or their detention by police upon arrival in Canada.”

When criminal charges are not possible, police may try to obtain a peace bond to try to restrict their ability to go online, according to the documents.

However, on some occasions, all the RCPM can do is to send an intervention team and “engage with the returnee and the returnee’s family to open up dialogue with the individual and to help support the returnee’s disengagement from their radical ideology and past behavior,” the documents say.

“Moving forward, we must continue to work to identify how to best address returnees,” according to the briefing note. “While they may have engaged in terrorism abroad and broken the law, not all returnees continue to post [sic] a threat — they may now be disillusioned with the cause.”

“The government of Canada must focus its investigative resources on those that continue to post [sic] a threat to Canada, and leverage efforts such as CRV [Countering Radicalization to Violence] to work with those who may no longer be interested in violence,” the briefing note adds.