UPDATE, 3:37 p.m.EST – Texas Gov. Greg Abbott said 10 people have been killed and 10 others are wounded after a shooting at Santa Fe High School on Friday.

The suspected shooter used a shotgun and .38 revolver that both belonged to his father, Abbott said during a press conference.

The suspect also had explosives, including a molotov cocktail, that were later found in the school and surrounding area, Abbot said.

The shooting was “one of the most heinous attacks that we’ve ever seen in the history of Texas schools,” the governor said.

UPDATE, 2:22 p.m. EST – The suspected shooter has been identified as 17-year-old Dimitrios Pagourtzis, whom police say is in custody.

The Associated Press first reported the suspect’s identity, citing a law enforcement official who was not authorized to discuss the shooting by name and spoke on condition of anonymity.

UPDATE, 11:25 a.m. EST – There are multiple fatalities after a school shooting at Santa Fe High School in Texas on Friday, according to law enforcement officials.

The Associated Press reported there are between 8 and 10 fatalities, most of them students. At least 12 people are injured, including one officer.

The nature of some of the injuries is gunshot wounds to arms and legs, hospital officials said Friday afternoon.

And, explosives were found at the high school following the shooting, and authorities were working to clear them.

At least eight people are dead after a shooting at Santa Fe High School in Texas, reports say https://t.co/qwC5MN8BLM

Fox 26 reported that “at least eight” people have been killed.

Breaking News: There are multiple fatalities in a school shooting in southeast Texas, a local official said. A suspect is in custody. https://t.co/Wgq5uXKOoh

UPDATE, 10:30 a.m. EST – The Santa Fe High School assistant school principal said the suspected shooter has been arrested, and the school district has confirmed that an “unspecified number” of people have been injured.

UPDATE: A suspect is in custody after reports of an active shooter at a high school south of Houston, an assistant principal at Santa Fe High School says https://t.co/oqRZUFvJK4 pic.twitter.com/U5yR7Fwr6n

The nature of the injuries is not known at this time.

BREAKING NEWS: Suspect involved in a shooting at Santa Fe High School in Texas “has been arrested and secured” and injuries are reported, the school district confirmed https://t.co/sZuvdAlfHx pic.twitter.com/bFOjmkKaG8

Police responded to the scene.

The Santa Fe Independent School District posted the following statement on its website:

“This morning an incident occurred at the high school involving an active shooter. The district has initiated a lockdown at the high school. We will send out additional information as soon as it is available.” 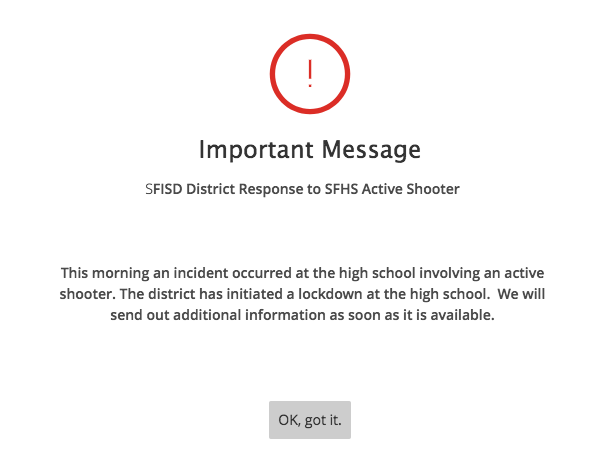 DEVELOPING: Major law enforcement response after reports of shooting at a school in Texas. https://t.co/se6Jj6aIKB – @KPRC2

No other information is known at this time.