A military C-130 Hercules transport plane from the Puerto Rico National Guard crashed Wednesday near a Savannah airport while performing a training mission.

While performing a training mission, an U.S. C-130 “Hercules” cargo plane from the Puerto Rico Air National Guard crashed about 11:30 a.m. today near the Savannah Hilton Head International Airport with 5 people on board. (1/2)

ABC News reported that five people are dead, and that there were nine people on board, according to Georgia Air National Guard Captain Jeffrey Bezore. It was later reported that all nine people who were on board are believed to be dead.

The Associated Press had initially reported that at least two people are dead after the crash, citing the county deputy coroner.

A new photo from the Savannah Professional Firefighters Association was posted online showing the aftermath and clean-up of the scene. 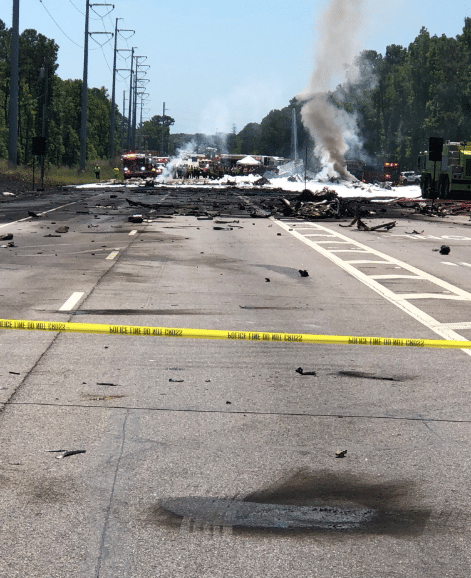 The Latest: A deputy corner says two people were killed in the crash of a military cargo plane near an airport in Savannah, Georgia. https://t.co/mxdae6vXNn

There were five people on board the plane, which crashed and burst into flames, officials told Fox News.

The status of all five people was unknown at this time.

It’s unclear what caused the crash.

Military c130 down at 21 and Gulfstream Rd. Avoid the area. 21 shut down until further notice. pic.twitter.com/6hUqwmkNUu

The aircraft was from the Air National Guard and crashed near the Savannah-Hilton Head International Airport. It was headed for Davis-Monthan Air Force Base in Arizona when it crashed at the intersection of Highway 21 at Crossgate Road.

An image of the crash posted by the Savannah Professional Firefighters Association showed an aircraft on the ground in flames.

One Twitter user posted what appears to be an image of the crash, and a huge cloud of black smoke can be seen.

This was another view of the crash posted on Twitter:

Emergency crews were on the scene.

The Chatham Emergency Management Agency in Savannah told people to avoid the area, as roads have been shut down.

There has been a plane crash at the intersection of Hwy 21 at Crossgate Rd. Roads will be shut down. Please avoid the area.

A Pentagon reporter for Military Times posted to Twitter that she was working to confirm if the C-130 was attached to the Georgian National Guard or not.

We are working reports of C-130 crash in Savannah; hearing it was attached to Georgia @NationalGuard but no confirmation yet. My heart goes out to the families, pilots and crew.

No other details were available at this time.