The Las Vegas Metropolitan Police Department on Wednesday released some bodycam footage taken during the Las Vegas shooting this past October, including footage of police officers entering the shooter’s hotel room.

The shooter, 64-year-old Stephen Paddock, rained down bullets on the Route 91 Harvest Festival on Oct. 1, 2017, from the 32nd floor of the Mandalay Bay Resort and Casino. Paddock was found dead in his room, along with several weapons that he had rigged to be similar to automatic weapons.

Paddock killed 58 people, all of whom the coroner said died of gunshot wounds – many to the head; he also injured hundreds of other people. It was the deadliest mass shooting in U.S. history.

“Breach. Breach. Breach,” one officer can be heard saying before an explosion goes off, as police gain entry into the hotel room.

One officer identifies a surveillance camera Paddock had set up in front of the door.

As they search the room, one officer asks if the shooter left a note.

“Did he write something on that,” one officer asks.

They also discuss how the scenario might have played out.

“Do you guys see anything in here that would indicate two guys,” one officer asks at one point.

“I see a guy switching guns, not reloading,” another officer is heard saying in the video as the team examines Paddock’s room. 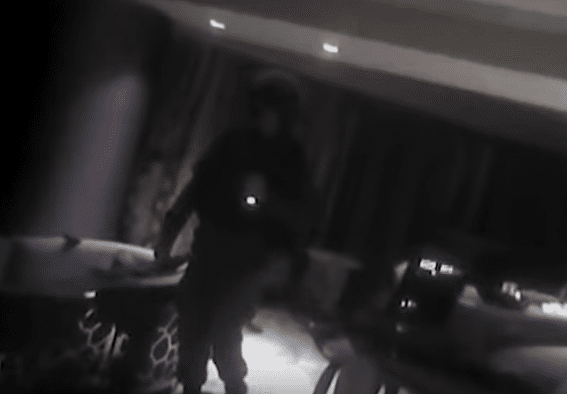 Footage of officers in their police vehicles and on the casino floor, and on various other floors of the hotel, was also released.

Several news outlets had requested video and audio material from the shooting. The police department initially did not release any material, but the Nevada Supreme Court ruled last week that police must released bodycam footage and the 911 call audio.

“I want the community to know the release of the videos, 911 and documents will have a significant impact on the victims of this tragedy,” said Sheriff Joe Lombardo. “We believe the release of the graphic footage will further traumatize a wounded community. And for that, we apologize.”

Authorities have yet to determine a motive for the shooting.

Las Vegas police had released a report and said Paddock acted alone and had not been radicalized by ISIS or any other terrorist organization.