Israeli troops on Friday fired volleys of tear gas and gunfire at Palestinian protesters who threw stones, burned tires and dragged away rolls of barbed-wire fencing on the border between Israel and the Gaza Strip.

At least one protester was killed and more than 700 injured, Gaza health authorities said, as weeks of deadly violence were building to a pair of large demonstrations expected next week.

Organizers expect tens of thousands of people to converge on five encampments set up along Gaza’s eastern border Monday, when the United States officially moves its embassy from Tel Aviv to Jerusalem, and Tuesday, the day Palestinians commemorate the 70th anniversary of the “Nakba,” or “catastrophe,” when hundreds of thousands of their forebears fled or were driven from their homes during the war over Israel’s founding.

Demonstrations are also expected in Jerusalem and the West Bank, where Palestinians have not for the most part joined in the Gaza campaign.

Known as the Great March of Return, the campaign aims to draw international attention to Israel’s long-standing blockade of Gaza, imposed after the Islamist militant group Hamas took over the coastal enclave in 2007, and to Palestinian demands that they return to lands in what is now Israel. 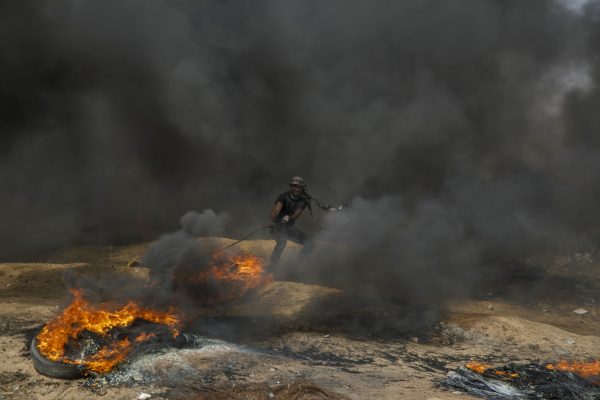 Under the shroud of smoke from the flaming tires, Palestinians aim projectiles toward the border fence separating Israel and the Gaza Strip, in a camp east of Khan Younis, on Friday, May 11, 2018. (Marcus Yam/Los Angeles Times/TNS)

Addressing protesters at a camp in central Gaza, Ismail Haniyeh, leader of the Islamist movement Hamas, vowed Friday to “turn the Nakba that ended Palestine to a Nakba that ends the Zionist enterprise.”

Israeli forces have drawn international censure for using live fire against the protesters, most of whom appeared unarmed and did not seem to present any immediate threat to the lives of the soldiers. At least 48 Palestinians have been killed and thousands injured since the protests began March 30, according to the Ministry of Health in Gaza; there have been no reports of casualties on the Israeli side.

The Israeli Defense Force says it is defending its borders and nearby civilian communities from a potential mass breach of the fence and from violent attacks planned under the cover of the protests.

“The IDF will continue operating to protect Israeli citizens and deter anyone who seeks to harm the security of the State of Israel and its citizens as necessary,” the Israeli army said in a statement.

It said about 15,000 Palestinians participated in Friday’s protests, during which “rioters hurled pipe bombs and grenades towards Israeli troops, sabotaged security infrastructure, burnt tires and hurled rocks towards the security fence and at troops.”

The army accused dozens of vandals of setting fires that damaged gas pipelines on the Gaza side of the Kerem Shalom crossing, through which humanitarian supplies are delivered to the enclave.

“This marks the second instance in recent days when rioters have harmed and attempted to sabotage humanitarian efforts carried out by Israel and other countries from around the world,” the army said. 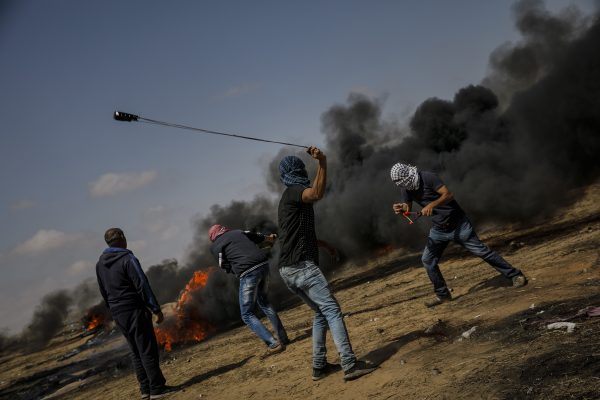 Under the shroud of smoke from the flaming tires, Palestinians aim projectiles toward the border fence separating Israel and the Gaza Strip, in a camp east of Khan Younis, on Friday, May 11, 2018. (Marcus Yam/Los Angeles Times/TNS)

One protestor, an 18-year-old named Mohammed, arrived at an encampment Friday in the southern Gaza Strip armed with a pair of wire cutters and a can of benzene.

“I’m here to get back my land,” he declared. Like many of the protesters, he asked to be identified by one name out of fear of being targeted by Israeli authorities.

Later, he joined dozens of youth who were setting fire to tires to create a thick smokescreen to protect protesters from Israeli troops and provide cover for those seeking to cut through the fence. Israeli forces responded with tear gas and live bullets, killing at least one of the protesters, according to medics.

At another camp east of Gaza City, a large crowd, including many women and children, watched an Israeli drone duel with kites set aloft by the protesters with burning rags attached to them in an effort to set fire to agricultural fields on the other side of the border. The crowd erupted in cheers as protesters attached hooks and ropes to the barbed-wire fence and hauled sections of it away.

A 13-year-old boy ran up to his mother, clutching a small piece of fencing. She declared it time to go home. Her brother was killed on the first day of the protests, said the 35-year-old woman, who gave her name only as Hanin, and she was worried for the boy’s safety. But she said she would be back Monday.

“It’s not right. They are living off our properties and all that we have,” she said of Israelis. Meanwhile, her husband has been unable to find work to support their seven children since authorities in Jerusalem stopped issuing permits for him to do construction jobs in Israel more than a decade ago.

“We want Jerusalem, and we want our freedom,” she said.