Richard Overton, the supercentenarian who served in World War II and is also the United States’ oldest living man, will be celebrating this year with a party where even the public is invited, My Statesman reported.

Overton was born on May 11, 1906, in Texas, and he received the title of America’s oldest living veteran after the passing of veteran Frank Levingston.

He told TODAY in 2016 that the secret to his long-lasting life is to chain smoke cigars, have a little whiskey with morning coffee, and to eat fried catfish and peanut butter ice cream regularly.

When it comes which whiskey he likes, Overton told My Statesman: “I like any kind you’ll bring me.”

Overton was a marksman in a segregated unit. He was stationed in Pearl Harbor and Okinawa, and he served in the South Pacific from 1940 through 1945, TODAY reported.

Over the past few years, Overton has gained a lot of media attention for being the oldest living World War II veteran.

“It’s all right,” Overton told My Statesman about his fame. “It’s something different. I like it.” 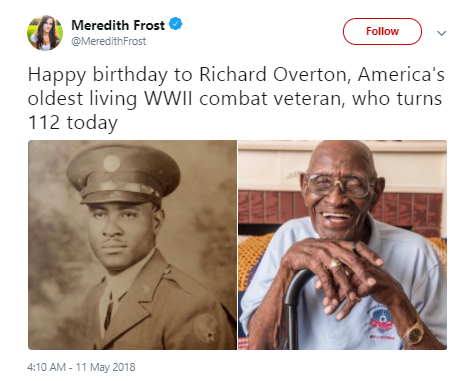 Overton said that he plans on living several more years.

“I love to have a birthday,” Overton told My Statesman on Thursday. “That’s another day. I hope I live another five years.”

“If man had [control over longevity], I’d have been dead, but God’s got it, and he’s keeping me well,” Overton said during a ceremony at Arlington National Cemetery in November 2007.

Overton isn’t slowing down. Last month, Austin businessman Robert Smith took Overton on his private jet to visit the National Museum of African American History and Culture in Washington. He received a private tour and met with former Secretary of State Colin Powell.

In 2016, Overton’s family created a GoFundMe so Overton can receive home health care.