A U.S. airstrike killed the senior ISIS-K commander in Afghanistan last week, according to a press release from U.S. Forces-Afghanistan.

Qari Hikmatullah and his bodyguard were killed in the U.S. airstrike in Bal Chiragh district, Faryab province, Afghanistan, on April 5.

“ASSF and U.S. counterterrorism forces killed Hikmatullah and they will kill any successors,” Nicholson said.“ISIS-K will be eliminated.” 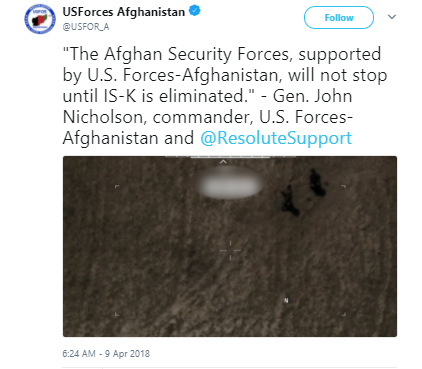 Hikmatullah was the main facilitator of ISIS-K fighters into northern Afghanistan prior to his death.

“ISIS-K in Jowzjan province is the main conduit for external support and foreign fighters from central Asian states into Afghanistan.,” according to the release. “Hikmatullah was the key leader for those operations.”

Brig. Gen. Mohammad Radmanish said Hikmatullah was tracked by Afghan-operated drones prior to the airstrike.

“Hikmatullah, a native Uzbekistani, had a history of divided loyalties; first as an Islamic Movement of Uzbekistan leader, followed by allegiance to the Taliban, and ultimately ISIS-K,” the release continued.

“Rahman’s succession to a leadership role raises concerns across ISIS followers in remote, isolated areas of Jowzjan,” the release said. “Rahman has had intermittent ties to both the Taliban and GIRoA, highlighting the difficulty ISIS-K is having replacing leaders.”

ISIS-K platoon commanders Omair and Abu Samaya were killed in a U.S. airstrike on March 16.

“Later that evening, an ASSF nighttime raid on the ISIS-K headquarters in Jowzjan resulted in the removal of another 13 terrorists,” the release said. “Afghan forces captured Omair and Abu Samaya’s predecessor Khitab Aka, ISIS-K’s former head facilitator of foreign fighters in Jowzjan on Jan. 28.”