Twitter has suspended 1.21 million accounts from August 2015 to the end of 2017 for “violations related to the promotion of terrorism,” it said last week. 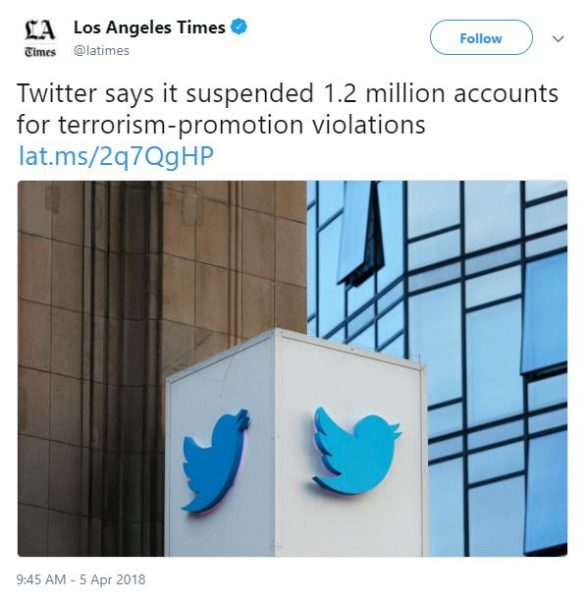 Keeping terrorist organizations off its platform has been a major focus for Twitter since the mass shooting that took place in San Bernardino in December 2015, according to the Los Angeles Times. Following that tragedy, then-President Barack Obama pushed for Twitter and other tech industry leaders to put more resources into making it “harder for terrorists to use technology to escape from justice.”

Now, 74 percent of the 1.21 million accounts that were removed from Twitter “were suspended before their first tweet.”

“We continue to see the positive, significant impact of years of hard work making our site an undesirable place for those seeking to promote terrorism, resulting in this type of activity increasingly shifting away from Twitter,” Twitter said. 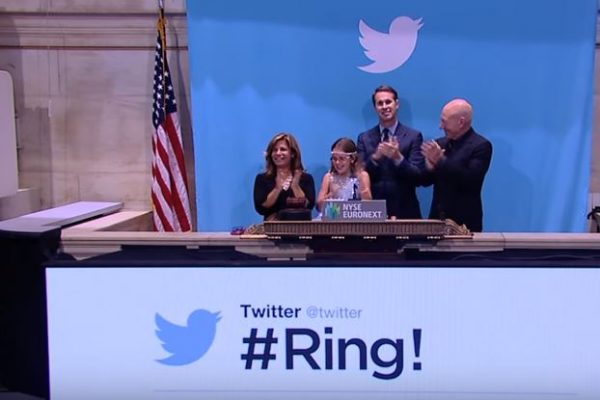 Twitter was listed on the New York Stock Exchange in 2013. (YouTube/NYSE)

As it becomes increasingly difficult for terrorist organizations to recruit using Twitter, the platform is noticing that the activity is “increasingly shifting away from Twitter.”

In addition to fighting the promotion of terrorism on the platform, Twitter is also focusing on mitigating its use as a catalyst for the spread of “fake news” and “malicious information.”

After the recent shooting at YouTube HQ in California, attempts were made to spread false information about the tragedy. With the help of automated technology, Twitter was able to detect the purveyors of the malicious information and suspended “hundreds of accounts for harassing others or purposely manipulating conversations,” said Del Harvey, Twitter’s Trust and Safety vice president, according to Newsweek.

As soon as news of the shooting broke, social media was awash with conspiracy theories and hoaxes. Some Twitter accounts attempted to spread Photoshopped images, which originated from message boards such as 4chan, while other accounts falsely claimed that the shooting was part of a “jihad attack.” 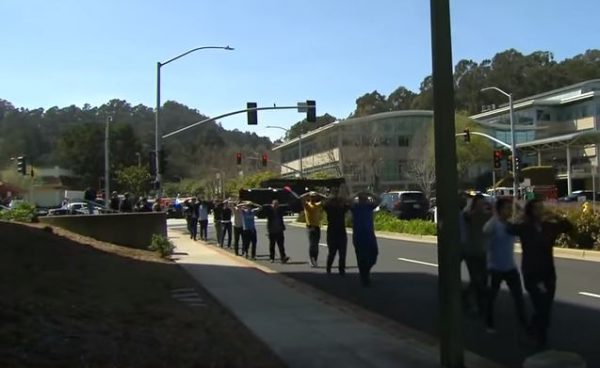 YouTube employees walk out of their offices with their hands up after a shooter was on their campus. (CBS Evening News/YouTube)

“Immediately following a crisis, we rapidly implement proactive, automated systems to prevent people who had been previously suspended from creating additional accounts to spam or harass others, and to help surface potentially violating tweets,” continued Harvey.

Twitter also received criticism about the platform allegedly being used to spread propaganda during the 2016 U.S. Presidential election. Russian staffers from a group that is known as the Internet Research Agency created and then distributed social media content on the platform with the suspected goal of influencing the American electorate.

According to a recent report, Twitter has 330 million average monthly users, which makes it smaller than Facebook, which has more than 2 billion users, and Instagram, which has 700 million users.