Russia may be tampering with chemical weapons evidence in Syria, US says

The U.S. said it is concerned that Russia may have tampered with evidence of a suspected chemical gas attack in Syria prior to investigators reaching the area, Reuters first reported this week.

The United States also accused Russia of blocking chemical weapons experts from visiting the site, despite having U.N. clearance to do so. 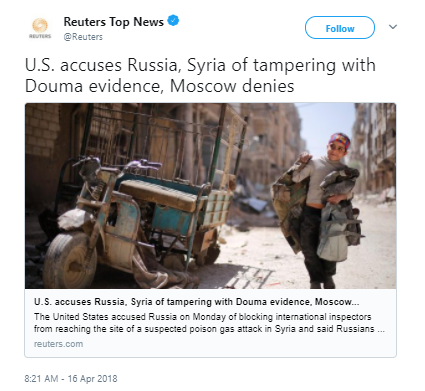 “It is our understanding the Russians may have visited the attack site,” U.S. Ambassador Kenneth Ward said at an OPCW meeting in the Hague in the Netherlands. “It is our concern that they may have tampered with it with the intent of thwarting the efforts of the OPCW Fact-Finding Mission to conduct an effective investigation.”

Russian Foreign Minister Sergei Lavrov told the BBC that Russia has not tampered with the site since the April 7 chemical attack that is suspected of killing dozens of people. The United States, U.K. and France launched a strike on Syria on Friday in response to the chemical attack.

A Russian defense ministry official said that OPCW investigators would be heading to the site on Wednesday. Syrian state media said that the OPCW entered Douma on Tuesday, but the OPCW has yet to confirm those reports.

British Ambassador Peter Wilson said that while the inspectors were given the green light from the U.N., Russia and Syria have yet to guarantee their safety.

Russia said that the reason for the delay was because of the missile strikes carried out by the U.S, France and Britain that hit chemical weapons facilities in Syria.

“We called for an objective investigation. This was at the very beginning after this information (of the attack) appeared. Therefore allegations of this toward Russia are groundless,” Kremlin spokesman Dmitry Peskov said.

Wilson dismissed these claims as “ludicrous.”

Southwest plane engine explodes mid-flight, woman partially sucked out of plane but pulled back in by passengers: reports