Russian ships’ proximity to underwater communications cables is a cause for concern for the United States and their allies, as the country could take out or tamper with communications by tapping or cutting the cables, the Associated Press recently reported.

Russian activity near undersea data cables in the northern Atlantic has increased dramatically. Russian submarine activity is at its highest since the Cold War.

“We’ve seen activity in the Russian navy, and particularly undersea in their submarine activity, that we haven’t seen since the ’80s,” Gen. Curtis Scaparrotti, Commander of the U.S. European Command, told Congress in March, the AP reported. 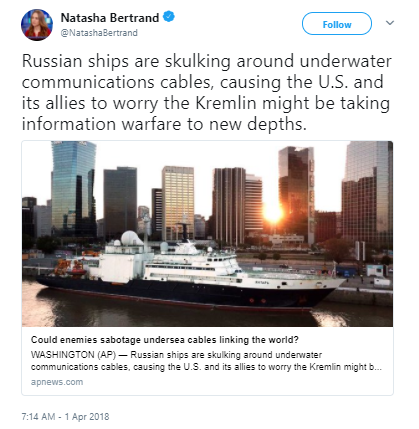 “We are now seeing Russian underwater activity in the vicinity of undersea cables that I don’t believe we have ever seen,” NATO Submarine Commander Rear Adm. Andrew Lennon of the United States Navy said last year. “Russia is clearly taking an interest in NATO and NATO nations’ undersea infrastructure.”

Plans were approved in November 2017 to establish a command that could quickly deploy forces across Europe in the event of a war. The plans would also allow NATO to keep a better eye on Russian activity in the Atlantic.

There are roughly 400 fiber-optic cables running 620,000 miles under the sea that are mostly owned by private telecommunications companies, and they carry almost all of the communications on the internet – including calls, emails, texts and $10 trillion worth of daily financial transactions.

“Can you imagine a scenario where those cables are cut or disrupted, which would immediately and potentially catastrophically affect both our economy and other ways of living if they were disrupted,” British Air Chief Marshal Stuart Peach said in a speech in December.

One Russian ship that worries the U.S. is the Yantar, an oceanographic vessel that has equipment “designed for deep-sea tracking” and “connecting to top-secret communication cables,” the AP reported.

This past September, the ship was seen near a submarine base in Kings Bay, Georgia, “collecting information about the equipment on American submarines, including underwater sensors and the unified (U.S. Military) information network.” However, there is no hard evidence of this activity.

Underwater data cables are frequently damaged by anchors being dragged along the seabed or by natural disasters such as tsunamis and earthquakes. However, that damage happens near the shore and is easy to fix. If damage were to be done in the deeper Atlantic, there would be a larger cause for concern.