A Navy investigation into last year’s T-45C Goshawk crash in Tennessee that resulted in the deaths of two men was the result of a pilot error, and that the aircraft was being flown too low and too fast.

In an emailed report, the Navy concluded that the instructor pilot was directing his student to fly too fast and too low to the ground, which goes against Navy procedure, before the aircraft crashed into a forest near Tellico Plains last October. 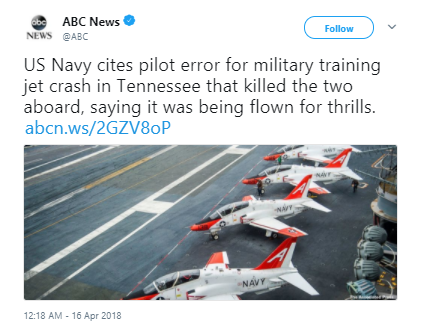 The report said Ruth was “flat hatting,” which means that the aircraft was being flow at a low altitude at a high rate of speed.

“The investigation further demonstrated [Ruth] was overly confident, nonchalant and aggressive at low-altitude training, with limited awareness of the performance capabilities of the T-45C in the [low altitude awareness training] environment,” according to the report. “This attitude influenced [Ruth’s] instructional style and conditioned [Burch] to fly the aircraft in an aggressive manner, without correction from [Ruth].”

“This included aggressive ridge line crossings and descending turns that took them below the minimum altitude of 500 feet above ground level many times, to include potentially as low as 210 feet,” the report said.

Roughly 30 seconds before the crash, Ruth told Burch they would deviate from the direct line of the training route so they would follow terrain.

Ruth took control of the aircraft and began a descending turn to demonstrate terrain-following techniques. Then, Ruth instructed Burch to make a hard right turn.

However, the aircraft was going too slow and too low relative to the terrain. In response to their maneuvers, the aircraft stalled and it was too late for the pair to eject.

After the crash, the Navy conducted a review to make sure that all instructor pilots are qualified to teach piloting techniques.