The parents of Otto Warmbier have filed a lawsuit against the North Korean government after their son was “brutally tortured and murdered” during his 17 months in captivity there, the Washington Post first reported on Thursday.

Fred and Cindy Warmbier filed the lawsuit Thursday in the U.S. District Court in Washington, D.C. The Warmbier family is seeking punitive damages from North Korea, including monetary compensation for Otto’s death and emotional suffering the family has endured. 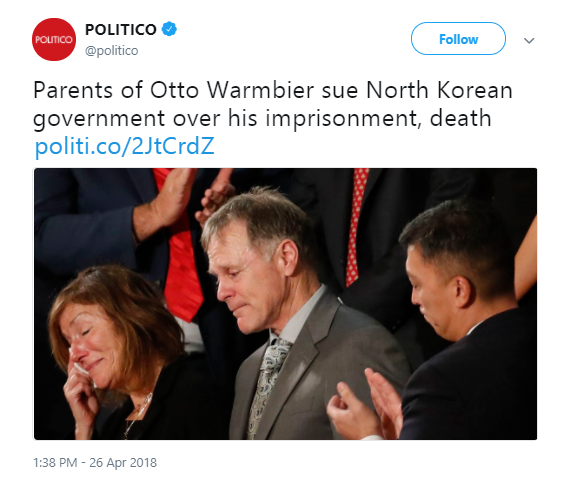 Otto Warmbier, a 22-year old college student, died just a few days after being brought back home to the U.S. after his detainment in North Korea. Otto was in a coma at the time, and it was widely reported that he had been in a coma for some time while imprisoned.

“Otto was blind and deaf. He had a shaved head, a feeding tube coming out of his nose, was jerking violently and howling, and was completely unresponsive to any of their efforts to comfort him,” according to the lawsuit.

The lawsuit comes simultaneously while North and South Korean leaders have met, and have now vowed to end 65 years of hostilities on the Korean Peninsula and put an end to the Korean War later this year.

Fred Warmbier said in a statement that Otto was “taken hostage, kept as a prisoner for political purposes, used as a pawn and singled out for exceptionally harsh and brutal treatment by Kim Jong Un. Kim and his regime have portrayed themselves as innocent, while they intentionally destroyed our son’s life. This lawsuit is another step in holding North Korea accountable for its barbaric treatment of Otto and our family.”

President Trump “spoke clearly about the pain that all Americans felt when we lost Otto Warmbier. That feeling of loss has not changed,” White House Press Secretary Sarah Huckabee Sanders said in a statement. “Although this is a private legal action to which the United States government is not a party, Americans remain committed to honoring Otto’s memory, and we will not forget the suffering of his parents, Fred and Cindy Warmbier.”

Relations between the U.S. and North Korea have warmed in recent months. On Thursday, the White House released pictures of now-Secretary of State Mike Pompeo meeting in North Korea and Kim Jong Un over Easter weekend.