According to the research by scientists at the University of Science and Technology of China, North Korea’s September nuclear bomb test, which also happened to be its most powerful, rendered the site unstable and in need of further testing.

“North Korea’s past tests have altered the tectonic stress in the region to the extent that previously inactive tectonic faults in the region have reached their state of critical failure. Any further disturbance from a future test could generate earthquakes that may be damaging by their own force or crack the nuclear test sites of the past or the present,” one of the authors of the study said.

Because China is less than 100 miles from the test site, Beijing has long had concerns of an accident or a possible radiation leak.

“It is necessary to continue monitoring possible leaks of radioactive materials caused by the collapse incident,” the study said.

Last week, North Korea announced that it was closing its nuclear test facility and would suspend any nuclear tests. The decision comes ahead of a planned summit with South Korean President Moon Jae-in, and a potential tri-nation summit sometime before June with President Donald Trump. 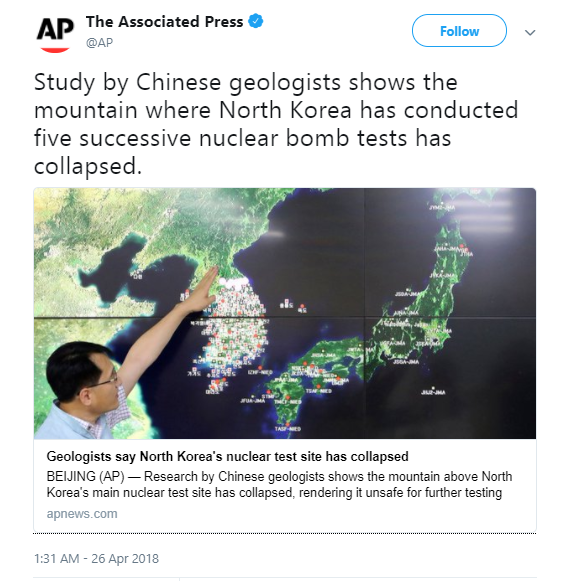 Four earthquakes followed in the coming weeks after the test. The first earthquake, which occurred just eight and a half minutes after the test, was “an on-site collapse toward the nuclear test center.”