Mexico’s ambassador to the U.S. said Tuesday that President Donald Trump’s call to send American troops to guard the U.S.-Mexico border is unwelcome.

“It’s certainly not something that the Mexican government welcomes, but as soon as we have further clarification, we can expect to have a better idea of where we are,” Ambassador Gerónimo Gutiérrez told CNN in an interview Tuesday.

“The Mexican government has formally asked for clarification of the President’s statements, both through the State Department and the Homeland Security Department,” he said. “The important thing is that both countries share the idea of having a secure border.” 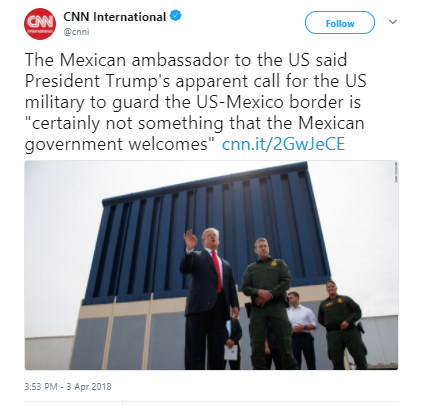 “The (U.S.) National Guard has been called before in different instances in past years in a supportive role,” Gutiérrez said. “I would assume that that’s what we’re looking at.”

President Trump’s statement on Tuesday came after he has made increased comments about immigration and border security in recent days, as a caravan of Central American migrants was heading north through Mexico to reach the U.S.

“Until we can have a wall and proper security, we’re going to be guarding our border with the military,” Trump said on Tuesday.

“That’s a big step,” Trump told reporters at the White House. “We really haven’t done that before, certainly not very much before.”

Currently, U.S. Border Patrol is in charge of patrolling and maintaining the border.

Trump on Tuesday also addressed a caravan of immigrants that was attempting to travel to the U.S. from Honduras.

“I told Mexico very strongly that you’re going to have to do something about the caravans that are coming,” Trump said, adding that the caravan was now “breaking up very rapidly.”

“The caravan makes me very sad that this could happen to the United States, where you have thousands of people that just decide to walk into our country and we don’t have any laws that could protect it,” he said.

“If it reaches our border, our laws are so weak and so pathetic… it’s like we have no border,” Trump said.

Gutiérrez said that even though both Mexico and the U.S. have a desire for border security, the two countries disagree on how to make the borders secure. He also reiterated that Mexico will not be paying for the border wall.

“A relation like the one between Mexico and the United States needs to have spaces in order to agree to disagree,” he said. “The issue of the wall is certainly one of them, and as my government has clearly expressed already, Mexico by no means would be paying for a wall.”