Speaking to the media, Thornberry said the proposed bill – the Comprehensive Pentagon Bureaucracy Reform and Reduction Act – would cut spending for the “Fourth Estate,” which is made up of 28 Defense Department agencies that employ 200,000 civilian personnel and 600,000 contractors.

The agencies make up roughly $100 billion of defense spending each year. The bill would cut the budget of the Fourth Estate by $25 billion by 2021 and would result in thousands of civilian personnel and contractors losing their jobs. 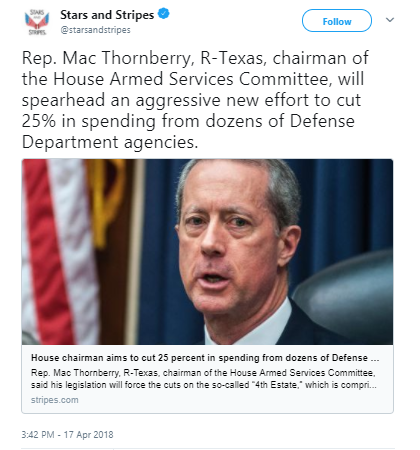 “All of the savings and efficiency have to stay within [the Defense Department] to get more capability into the war fighter faster,” Thornberry said. “To summarize the whole thing from my perspective, it is to reduce the overhead to put more resources at the tip of the spear.”

The legislation is intended for the 2019 National Defense Authorization Act.

“If I’m not making somebody nervous, I’m not doing anything,” Thornberry said regarding the cutbacks. “We’ve got to have a culture that is willing to be disruptive if we are going to adequately defend the nation.”

The Defense Department’s chief management officer would receive a new position and create a plan on how to make cuts by early next year.