Jessica Harris knows from experience that dogs can be more than companions — they can also save lives.

The former combat medic with the Washington Army National Guard worked alongside service dogs throughout her 20 years in the military— including her tour of duty in Iraq — and learned how crucial they are to protecting their human partners.

After leaving the military, she started K9 Salute, to recognize the sacrifice of police canines and donate to organizations that support these service dogs. The company makes all-natural dog treats.

“After seeing working dogs in action, you really develop a real appreciation for the work that these dogs do and the amount of time and training that it takes,” she said.

After Harris retired from the Guard, she moved to North Carolina for a job in cardiac and vascular surgery, but was later laid off. Around that time, she learned that eight police K9s had been killed in just one month.

She had always had some business aspirations as well as a passion for the dogs, so she decided to combine them and her all-natural dog treat company was born in Durham in 2016.

After coming up with the idea for the company, she entered a contest sponsored by the Carolina Small Business Development Fund and won a guaranteed loan to kick-start K9 Salute. The fund also connected her with business mentors in the Triangle area who gave her advice.

Dean Bundschu, executive director of Bunker Labs RDU, has worked with Harris through Bunker Labs, which helps veterans start businesses and gives them resources to succeed.

“She came to our program and has been one of the most active members,” he said. “She’s been a joy to have around and work with.”

Bunker Labs helped Harris refine her business plan and connected her with manufacturers who could create packages for her items.

Harris then began to develop her products by researching the current market for dog treats. She noted that the pet industry often follows human food trends, like the push for all-natural ingredients. 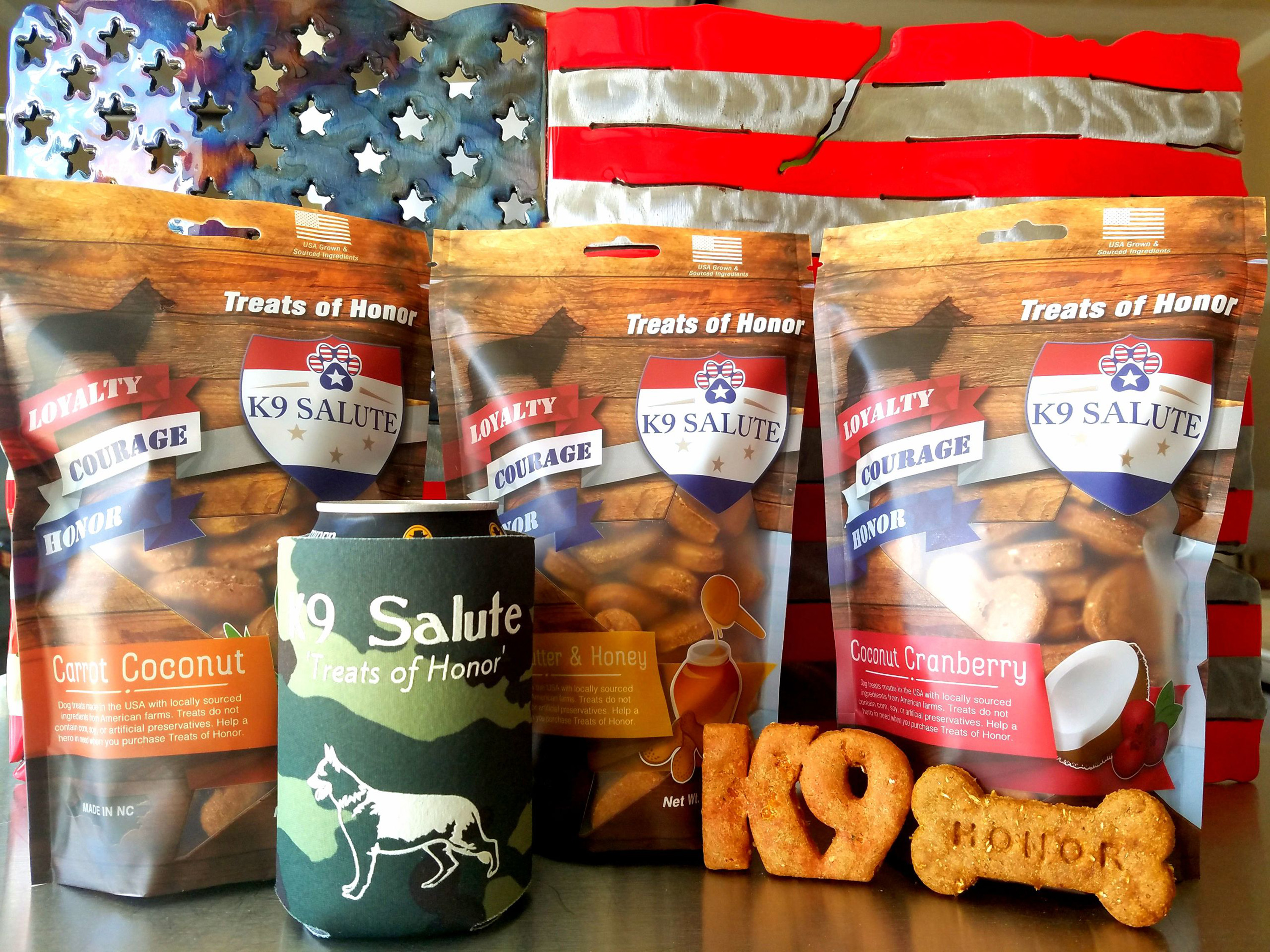 Some of the products available from K9 Salute. (K9 Salute)

“I would go to pet stores, and I probably looked like a weirdo just standing in the pet food aisle, really looking at ingredients,” she said.

Although many products claim to be natural, she realized that they still contain lots of artificial ingredients.

“People are just smarter, and you can’t really fool them with marketing gimmicks,” she said. “I wanted to focus on treats that literally you and I could eat.”

Harris also made a point of working with local farmers in the area, especially those who are veterans.

She currently has three flavors of treats — carrot coconut, coconut cranberry and peanut butter and honey. Each bag also features a tribute to a fallen K9 hero on the back. Harris reached out to police departments that had recently lost K9s to get their permission to feature the dogs, an offer that was met with enthusiasm. 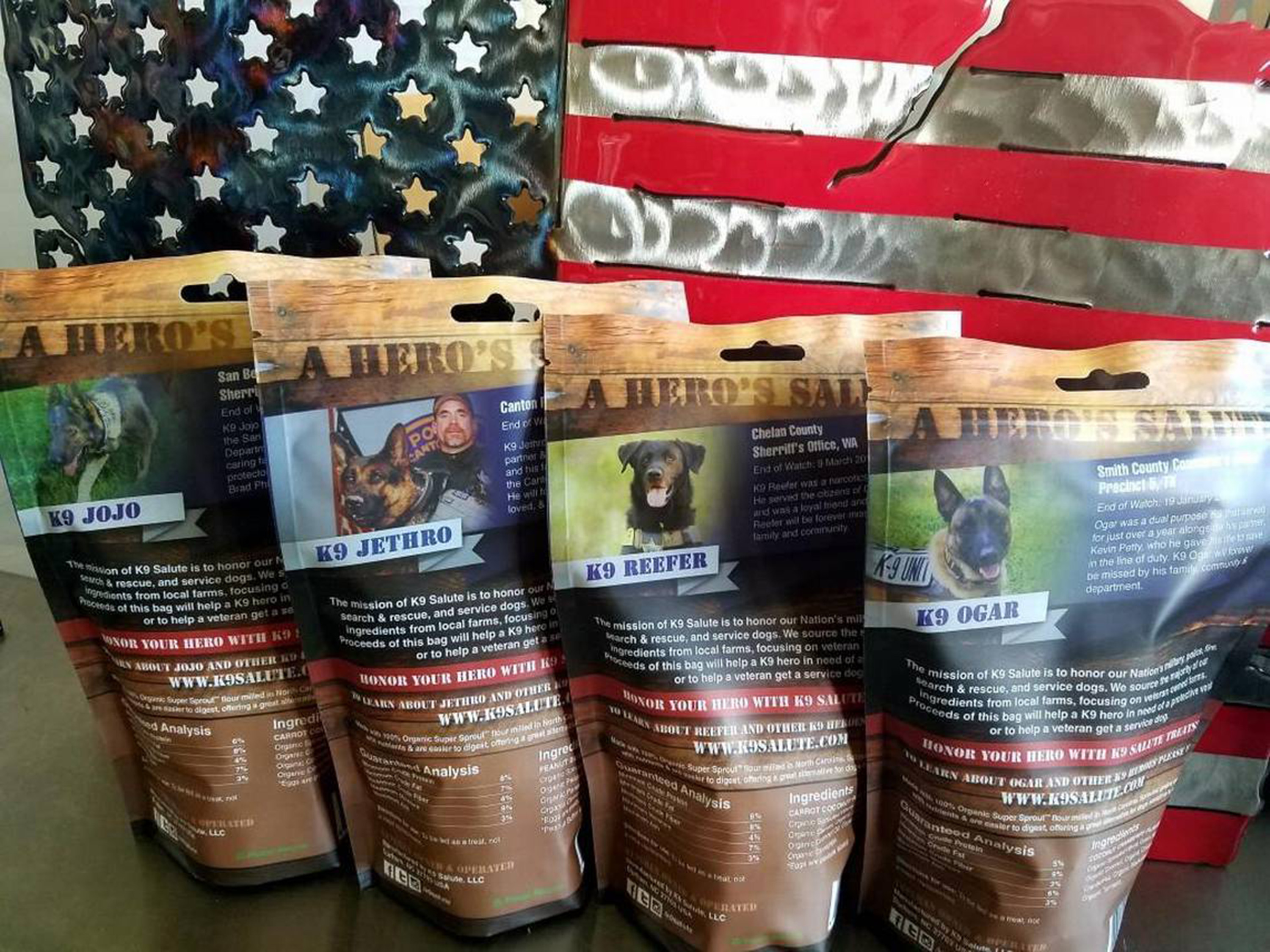 Each bag of K9 Salute treats features a tribute to a fallen K9 hero on the back. Owner Jessica Harris reached out to police departments that had recently lost K9s to get their permission to feature the dogs.
(K9 Salute)

In the future, she hopes to develop a jerky line for dogs as well as a paw and nose balm.

Although Harris operates the business entirely by herself right now — including making the treats from scratch — she is looking into hiring additional people and possibly outsourcing the manufacturing.

Her products are available through her website and a few pet stores across the country, including one near Fayetteville and another in California

Bundschu noted that Harris has been successful in developing her company because of the leadership skills she learned through her military service. She also makes an active effort to connect with local business entrepreneurs.

“She knows there are a lot of other companies out there, and she looks at those companies and connects with those entrepreneurs and learns what they have done to be successful,” he said.

Harris recently was named a winner of The 2018 American Small Business Championship by SCORE, a network of business mentors.

Moving forward, one of Harris’s main goals is to donate products and funds to K9 organizations. So far, she has contributed treats to K9s for Warriors in South Carolina, donated products to Vets to Vets United in Durham and sent care packages for deployed military working dog teams.

As her business continues to grow, she plans to give money to organizations to help veterans get service dogs and to assist police departments in purchasing protective equipment for their dogs, which can cost between $2,000 and $4,000.

“Unfortunately many of the canine units don’t have a lot of money,” she said. “I want to provide money to fund protective vests for them.”

Harris emphasized how these service dogs have a special place in her heart as both a dog owner — to 6-year-old Bullmastiff Tilly — and retired combat medic.

“The work that they are able to do is one humans can’t do, whether sniffing for bombs or looking for drugs,” she said. “Sending a dog in first prior to a human officer can potentially save that human’s life.”