Death of McMasters’ father under investigation as ‘suspicious’

H.R. McMaster Sr., who was 84, died on April 13 at Cathedral Village, a senior living Continuing Care Retirement Community. His death is being investigated by the Philadelphia Police Department Homicide Unit, the Pennsylvania Attorney General’s Office and other agencies as “suspicious,” WPVI-TV reported. 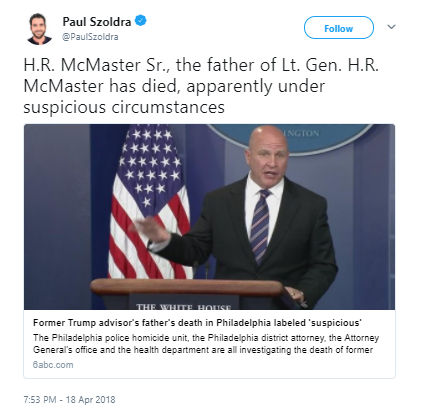 McMaster Sr. suffered a stroke and allegedly died after falling, hitting his head and being placed in a chair. He died of blunt force trauma, according to the health department.

While the health department has deemed his death to be an accident, investigators are seeking to find if he received proper care in the retirement community.

Employees at the facility also informed the McMaster family that records regarding McMaster Sr.’s death were falsified. Investigators are looking into that information, as well.

“As soon as we became aware of the alleged incident, we began an internal investigation and contacted the appropriate authorities,” Cathedral Village said in a statement to Fox News.

“We want to reassure you that the safety and welfare of every resident at Cathedral Village remains our utmost priority and we will continue to make every effort to ensure their well-being,” the statement continued. “It would be inappropriate to comment further until the investigation is complete.”

Philadelphia police executed a search warrant at the retirement community.

“We are working closely with the Philadelphia Police Department to thoroughly and carefully review this tragic incident. This investigation is in the very early stages,” a spokesperson for the Office of Attorney General Josh Shapiro said in a statement.