A culture of excessive risk-taking and a lack of training were contributing factors to the deaths of four American soldiers killed in the October ambush in Niger, according to a Pentagon report.

Military officials familiar with the report explained to the Wall Street Journal a number of failures made that led to the deadly ambush.

The Pentagon on Monday said it had concluded an investigation into the incident, and that the U.S. military was briefing the families of the four soldiers killed in the ambush on findings from the investigation, and that the report would later be released to the public. 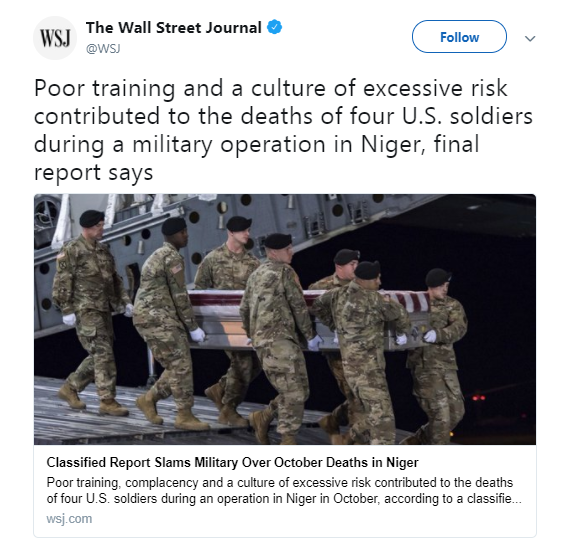 According to the report, low-level commanders were taking liberties “to get operations approved through the chain of command.” In one case, an officer copied and pasted orders for a different mission into a concept of operations to gain approval, officials told the Wall Street Journal.

The report, which will be released to the public in the coming days, includes recommendations by Secretary of Defense Jim Mattis to improve chain-of-command protocols, as well as training.

The officials said the report wouldn’t recommend any punishment for anyone but the Army or SOCOM (Special Operations Command) could pursue disciplinary measures for those involved.

SOCOM, AFRICOM (Africa Command) and the Army will be given roughly 10 “primary directives” by Mattis and will have four months to make efforts to solve problems in the report.

Rep. Mac Thornberry, who chairs the House Armed Services Committee, released a statement and said it was “troubling” the report was leaked:

“There are a number of important oversight issues related to the ambush of US forces in Niger and America’s military posture in Africa. The Committee has a copy of the classified Niger investigation and will hold a briefing with AFRICOM officials as soon as possible. However, it is deeply troubling that individuals with access to the report chose to leak details of the investigation before families of the fallen could be fully briefed. To me, that is an unconscionable breach of faith with the families of our warfighters and perhaps a violation of law. The families who lost loved ones to this tragedy have suffered enough. They deserve the space to process the findings of this investigation before it is debated in the media. No one, whether in the legislative branch of the executive branch of government, has the right to take that space from them. I have directed the Staff Director of the House Armed Services Committee to begin an inquiry to ensure that the leak did not come from our Committee, and I urge the Chairmen of the other committees with access to the report to do the same.”

On Oct. 4, 2017, four American soldiers and several Nigerian troops were killed when they were ambushed by ISIS-linked militants near the village of Tongo Tongo, more than 100 miles north of the country’s capital.

The investigation findings are expected to cover how Operational Detachment – Alpha Team 3212 was on a routine, approved patrol before being redirected to an operation to go on a kill-and-capture raid for Doundoun Cheffou, an ISIS-linked militant believed to be involved in the kidnapping of an American in Mali.

According to preliminary findings, two Defense Department officials said senior officers in the chain of command believed that Team 3212 was going to meet with tribal leaders only, and they were not aware of a reroute to the Mali border to go after Cheffou.

The mission was later scrapped due to inclement weather, and Team 3212 continued with its reconnaissance mission to collect information when intelligence officials learned that Cheffou had left his encampment on the Mali border.

Senior officers at the Africa Command headquarters and its Special Operations component in Stuttgart, Germany, and senior leaders at a Special Operations regional command in Chad were not aware of any changes to the plan, according to the findings.

On Oct. 4, 2017, Team 3212 was ambushed by ISIS militants with rocket-propelled grenades and heavy machine guns. The team was making its way back to the base in Ouallam, from Cheffou’s encampment.

There are roughly 800 American troops stationed in Niger and a $110 million drone base is being built there.