Chinese police catch fugitive in crowd of 60,000 with facial recognition

Chinese police were able to catch a fugitive at a concert in Nanchang, Jiangxi province, with roughly 60,000 concertgoers by using facial recognition technology.

A man, identified as “Mr. Ao,” was arrested last week at a concert with Hong Kong singer Jacky Cheun after having driven 60 miles to the concert with his wife and friends, the Telegraph reported.

Mr. Ao was wanted for an “economic dispute” in the Guangxi province.

Not long after the music started, the suspect was approached by several police officers and arrested. 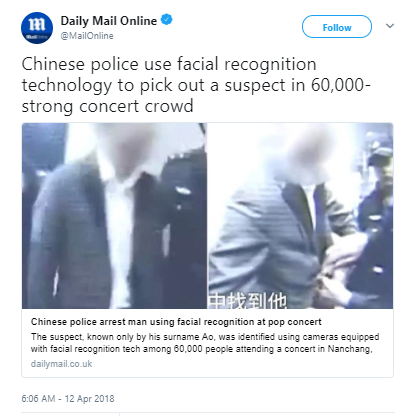 “The concert attracted more than 60,000 visitors, so we paid a lot of attention to its security,” police officer Li Jin told China Daily. “We set up several cameras at the ticket entrance, which was equipped with facial recognition technology.”

Mr. Ao was shocked upon his arrest, Li added.

Facial recognition technology is widespread in China, as the country has been pushing for such systems to be used for law enforcement purposes. The technology is being used to monitor individuals at public events, airports and other large public areas.

Last month, 33 people were detained by police at a train station due to police wearing facial recognition sunglasses capable of identifying people in larger crowds. The images are sent to a database that identifies them and checks their personal information.

South Carolina man caught planting ISIS bombs, one in a teddy bear, and has been charged

'Average day' aboard USS Carl Vinson is anything but average