The new jamming equipment, which is capable of jamming communications and radio systems, was installed in the last three months on Fiery Cross Reef and Mischief Reef, the Wall Street Journal reported.

A photo of a suspected jamming system was taken last month by commercial satellite company DigitalGlobe and it was provided to the Wall Street Journal. The photo shows a jamming system on Mischief Reef.

China denies the claim that it is militarizing the artificial islands in the South China Sea where Brunei, Malaysia, the Philippines, Taiwan and Vietnam dispute the territorial waters.

“While China has maintained that the construction of the islands is to ensure safety at sea, navigation assistance, search and rescue, fisheries protection and other nonmilitary functions, electronic jamming equipment is only for military use,” a U.S. Defense Department official told the Wall Street Journal. 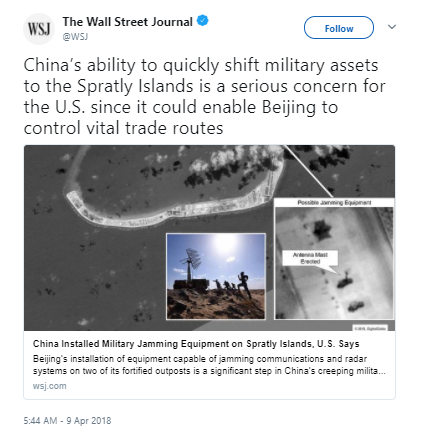 While the U.S. routinely conducts maritime training drills in the South China Sea, military presence in the region is regularly contested. China lays claim to a number of disputed islands and territories, which often results in touchy situations during routine drills. China asserts its exclusive territorial claims and sovereignty to the South China Sea.

Even with China continually on edge, the U.S. has reaffirmed that it will continue to not only keep a noticeable presence, but also conduct necessary drills as needed.

“China has built a massive infrastructure specifically — and solely — to support advanced military capabilities that can deploy to the bases on short notice,” Adm. Harry Harris, the head of the U.S. Pacific Command, told the Senate Armed Services Committee in March, the Wall Street Journal reported.

China recently deployed its Liaoning aircraft carrier and 40 other warships and submarines near Hainan Island to conduct drills there.

The news comes amid the United States’ rising tensions with China following new tariffs that have resulted in a trade war and China’s reported plans to deploy its first domestic aircraft carrier.