The Army said this week that a memo about soldiers possibly being exposed to bad anthrax vaccines, thus potentially eligible for 100-percent disability benefits, is “completely without merit,” and the memo was retracted.

The memo circulated heavily on social media and said that bad anthrax vaccines were given to soldiers from Fort Campbell, Kentucky, and Fort Drum, New York, from 2001 to 2007, who deployed to Iraq or Afghanistan, the Army confirmed in a recent statement. The 8th Army memo from the 2nd Battalion, 1st Air Defense Artillery Regiment, 35th Air Defense Artillery Brigade in Korea touted potential 100-percent Veterans Affairs (VA) disability benefits for the aforementioned group of soldiers who might have been exposed.

In an emailed statement to Military.com and other outlets, a spokesperson for the 2nd Battalion, 1st Air Defense Artillery Regiment said the memo was “completely without merit.”

“Second Battalion, 35th Air Defense Artillery Brigade recently published an internal memorandum with the intent of informing soldiers of the potential health risks associated with the anthrax vaccine based on information they believed was correct,” Christina Wright said in the emailed statement.

“Defense Health Agency representatives have verified the information is false and completely without merit. Once the brigade discovered the error, the correct information was published to their soldiers,” she added.

Wright said that while anthrax side effects are typically short-lived and cause limited harm, there is a chance it could be very dangerous or deadly.

“The potential side effects of vaccines, including anthrax, are generally mild and temporary,” Wright said. “While the risk of serious harm is extremely small, there is a remote chance of a vaccine causing serious injury or death.”

Secretary of the Massachusetts Department of Veterans’ Services Francisco Urena recently tweeted that the memo was a “scam.” 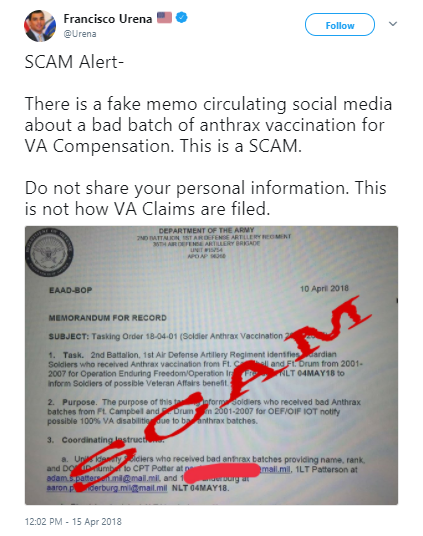 “There is a fake memo circulating social media about a bad batch of anthrax vaccination for VA Compensation,” Urena tweeted. “This is a scam. Do not share your personal information. This is not how VA Claims are filed.”