A retired Air Force sergeant who was forcibly removed while attempting to deliver a flag-folding speech at a retirement ceremony for his friend filed a lawsuit on Monday, claiming that he was forcibly removed because he mentioned the word “God” in his speech, Fox News reported.

Rodriguez told Fox News that his First Amendment rights were violated for having been removed from the ceremony. Rodriguez is suing the Air Force and is demanding an apology and admission of wrongdoing.

“This is about my Constitutional right,” Rodriguez said of the lawsuit. “I was removed from the speech because my script mentioned God. Air Force officials did not want me to utter those words. There was no direct communication between the Air Force and myself to forbid me from making this speech.”

In a report by the Air Force Inspector General in 2016, the report said Rodriguez was removed because his speech was not in line with Air Force regulations – not because it mentioned the word “God” in it.

According to the report, Rodriguez was told multiple times by base leaders that he could not attend as a guest and wouldn’t be allowed to make a speech.

Rodriguez stood and made the speech at the ceremony, but was dragged away by noncommissioned officers (NCOs), while continuing to make the opening lines of the speech. Video of Rodriguez’ forceful removal was captured and went viral online.

According to an Air Force statement last year:

“Evidence indicated Mr. Rodriguez was removed by members of the squadron because he attempted to participate in the ceremony even though his participation had been disapproved by the hosting squadron commander… When it became clear that Mr. Rodriguez intended to act inconsistent with the commander’s restrictions, he was removed by several squadron NCOs (noncommissioned officers). The inquiry found no evidence that the NCOs were motivated to impair Mr. Rodriguez’s Constitutional rights of freedom of speech or religion.”

Some of Rodriguez’ speech – from an old version of the “Flag Folding Ceremony Air Force Script” – said: “Let us pray that God will reflect with admiration the willingness of one nation in her attempts to rid the world of tyranny, oppression, and misery. It is this one nation under God that we call, with honor, the United States of America.” 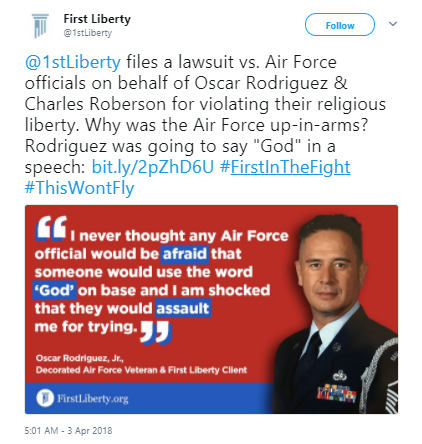 According to the lawsuit, officers at the base created an email that suggested assault charges be filed against the officers who removed Rodriguez from the ceremony. Sasser believes this information could help their case.

“Since retirement ceremonies are personal in nature, the script preference for a flag-folding ceremony is at the discretion of the individual being honored and represents the member’s views, not those of the Air Force,” Air Force spokeswoman Ann Stefanek said in 2016.

The Air Force Times reported in 2016 that Rodriguez was once a member of the Honor Guard, but was removed for unknown reasons prior to his own 2013 retirement ceremony.

A former commander of Rodriguez’ told investigators that he ordered Rodriguez not “to participate directly or indirectly in any kind of Honor Guard-type duties, to include the flag-folding ceremony.” Rodriguez made the speech despite the order.

“The Air Force broke the law, and now it’s trying to do a shameless cover-up … one that anyone can see through,” First Liberty’s Michael Berry said at the time. “The Air Force has declared war on one of its own. If the Air Force thinks it can dishonor a decorated veteran and violate the Constitution like this, the Air Force had better buckle up.”

As a result of this incident, the Air Force concluded that the official procedure for flag-folding scripts at retirement ceremonies was too harsh and decided to rescind the official language.