A U.S. Air Force officer is facing a potential court-martial for allegedly asking service members to send him pictures of their genitalia from places all around the world, the Associated Press reported.

Second Lt. Travis Burch was charged this month with conduct unbecoming an officer and gentleman.

Burch created a group, code named “Whiskey Delta Tango,” which grew to 84 people, including 58 active military members, who would take pictures of their genitalia in different parts of the world and then send it to him in exchange for commemorative T-shirts, patches and coins as a reward. 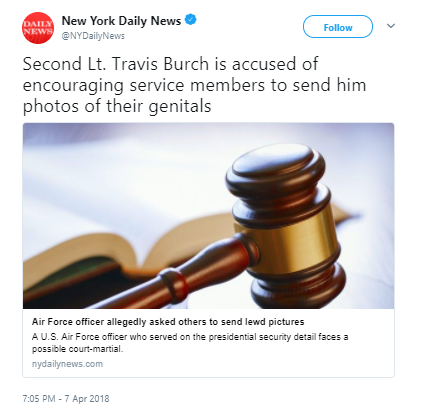 Defense lawyer Jeremiah Sullivan III said that the group took the photos in a “jovial, joking spirit” and that no crime was committed.

“The Air Force has spent well over a year investigating this case all over the globe,” Sullivan said. “This was a completely private group that is now embarrassed by Air Force investigators. They’re now being publicly shamed for lawfully and voluntarily sharing their penis pictures. It’s a private matter.”

Burch reportedly served on the Presidential detail from 2014 to 2016 while stationed at Joint Base Andrews in Maryland and took a photo at then Vice President Joe Biden’s residence.

Sullivan said that while Burch did serve on the Presidential detail, no photo was ever taken.

“There were never photos taken at the White House or the Vice President’s house,” he said. “We know that for a fact.”

While searching Burch’s quarters, investigators found a hard drive used to store the photos in a hollowed-out book. They also found coins and other prizes that would be given to members for sharing photos.