The U.S. Air Force has cleared a Colonel for exercising his religious beliefs when he refused to sign off on a certificate of spouse appreciation for a retiring master sergeant’s same-sex spouse, the Air Force said Monday.

Col. Leland Bohannon was suspended last year from command and wasn’t promoted to one-star general after the Air Force ruled that his refusal to sign the certificate was an act of discrimination.

Bohannon decided he would not sign the certificate because doing so would “signify his personal endorsement of the same-sex marriage,” which goes against his religious beliefs, he said. 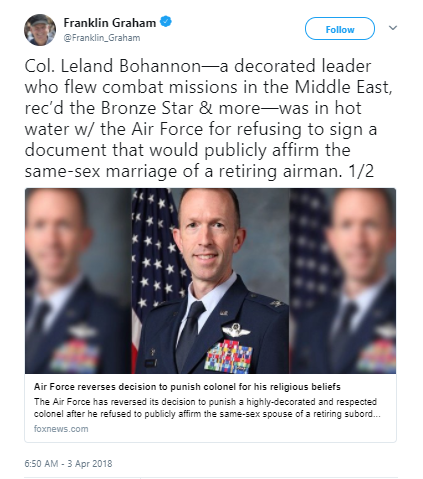 “The Director concluded that Col. Bohannon had the right to exercise his sincerely held religious beliefs and did not unlawfully discriminate when he declined to sign the certificate of appreciation for the same-sex spouse of an airman in his command,” Wilson wrote to the lawmakers. “The Air Force has a duty to treat people fairly and without discrimination on the basis of race, color, sex, national origin or sexual orientation and [Bohannon] met that duty by having a more senior officer sign the certificate.”

The case came to light when the retiring master sergeant took offense after Bohannon asked a higher-ranking officer to sign the certificate instead. The master sergeant filed an Equal Opportunity (EO) complaint, which was reportedly legitimized by investigators, who claim Bohannon unlawfully discriminated against the master sergeant.

Several Republican senators wrote a letter to the Air Force asking to reverse the decision.

“Col. Bohannon has suffered severely on account of the EO investigator’s mishandling of his religious liberty rights,” the senators wrote, according to Fox News. “The Air Force owes it to him to see that justice is restored, along with his good name.”

“Col. Bohannon recognized the moral and legal dilemma this situation presented, and to his credit, sought to carve out a solution that would affirm the contribution made by the retiring officer’s same-sex partner while at the same time allowing the colonel to abide by his religious convictions,” the letter continued. “The Air Force’s refusal to accept this compromise and its refusal to grant an accommodation – when doing so would cause no discernable harm – raises the question as to which circumstances, if any, would move the U.S. Air Force to defend the free exercise rights of its soldiers.”