An Air Force combat controller killed in action while in Afghanistan in 2002 will be posthumously awarded the Medal of Honor, Task & Purpose first reported.

Technical Sgt. John Chapman would become the first airman to receive the Medal of Honor since the Vietnam War.

He was one of two airman to receive the Air Force Cross, the service’s second-highest honor, for his actions during the Battle of Roberts Ridge against al-Qaeda fighters in Afghanistan. 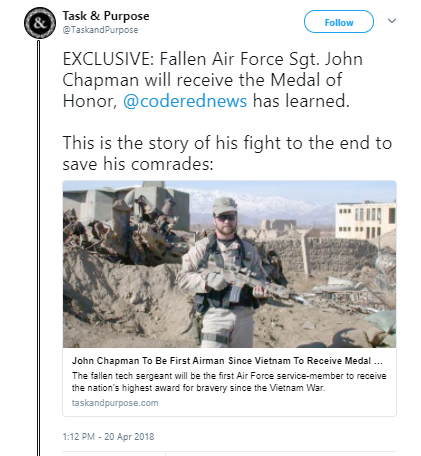 The upgrade of his award is based on new information provided by enhanced video captured by a Predator drone and an AC-130 gunship.

According to Champan’s Air Force Cross citation, he died while engaging an enemy machine gun. Believing Chapman to be dead because his infrared aiming laser stopped moving, the team of Navy SEALs with Chapman withdrew under heavy fire from the enemy, according to the New York Times.

However, footage of the battle revealed that Chapman was not dead, but instead temporarily unconscious. The footage suggested that he regained consciousness and defended himself by killing two enemy fighters. After crawling into a bunker, Chapman killed one charging enemy with a rifle shot. He killed a second enemy in hand-to-hand combat.

When two helicopters carrying a quick reaction force of 35 Army Rangers arrived, Chapman left the bunker and provided cover fire for the helicopters. He was then struck in the chest twice by machine gun fire and died instantly.

The Air Force recommended Chapman for the Medal of Honor in 2016.

Sources familiar with the matter told Task & Purpose that Chapman’s family was notified in March that he would be posthumously awarded the Medal of Honor.