Rep. Ron DeSantis from Florida and 10 other lawmakers outlined accusations against Clinton and others involved in potential crimes, including the Clinton email probe, the Uranium One case and the anti-Trump dossier. 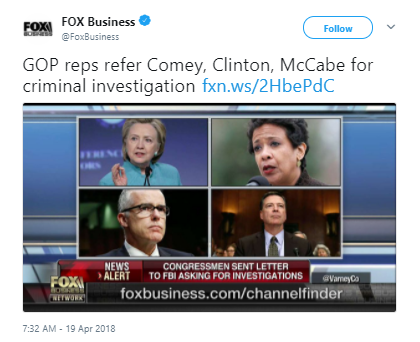 “In doing so, we are especially mindful of the dissimilar degrees of zealousness that has marked the investigations into former Secretary of State Hillary Clinton and the Presidential campaign of Donald Trump,” the lawmakers wrote in a letter on Wednesday, underlying that those investigations were not properly conducted and should be thoroughly pursued.

“Because we believe that those in positions of high authority should be treated the same as every other American, we want to be sure that the potential violations of law outlined below are vetted appropriately,” the letter read.

The referral included a number of possible violations by Comey, including a statement he made before interviewing Clinton about the use of her personal email to send classified government correspondence.

Comey defended his statement in his recently published book, “A Higher Loyalty.”

“Any investigator or prosecutor who doesn’t have a sense, after nearly a year of investigation, where their case is likely headed, is incompetent. Prosecutors routinely begin drafting indictments before an investigation is finished if it looks likely to end up there, and competent ones also begin thinking how to end investigations that seem likely to end without charges,” Comey wrote.

Regarding Clinton, GOP lawmakers said a lawyer for Clinton and the Democratic National Committee paid Fusion GPS to conduct research that resulted in the Steele dossier.