President Donald Trump on Tuesday spoke to a group of Marines at Marine Corps Air Station Miramar in San Diego. He was in town in order to inspect border wall prototypes. 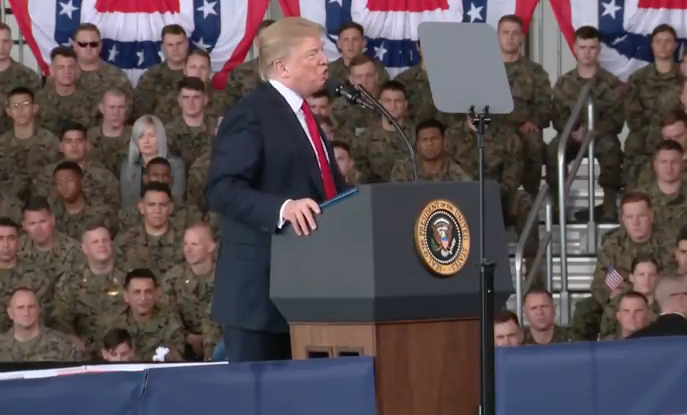 “Marines are the kind of people you want at your side,” Trump said.

“For too long the men and women of the United States Armed Forces have been asked to do more with less,” he said. “We have finally ended the devastating defense sequester that you have [experienced] for years.”

“In 2019, we want to give you your largest pay raise in over a decade,” Trump continued. “You deserve it.”

Trump said there would also be new F-35 strike fighters sent to Miramar, as well as “brand-new CH-53K King Stallions.”

“We’re going to send them right here to Miramar,” the President pointed out, “weaponry like we’ve never had before or sent before.”

“Space is a war-fighting domain. … We might even develop a Space Force,” he said. “Maybe we need a new force – we’ll call it the Space Force.”

The President went on to speak about the border.

“That wall still stop so much,” he said. “We have two or three [wall prototypes] that really work. … You know, I’m a builder. … We’re going to have a great wall, it’s going to be very effective. You’re not going to see them climbing over this wall too easily.”

Trump then spoke about ISIS, and said that the Coalition has taken back “almost 100 percent of the territory previously held by these terrorists in Syria and Iraq.”

“We knocked the hell out of ’em,” Trump said of the terrorists.