Veterans groups, including the Veterans of Foreign Wars (VFW) and Iraq and Afghanistan Veterans of America (IAVA), have mixed feelings about Dr. Ronny Jackson, who was recently nominated by President Donald Trump to be the next secretary of Veterans Affairs, according to ABC News. 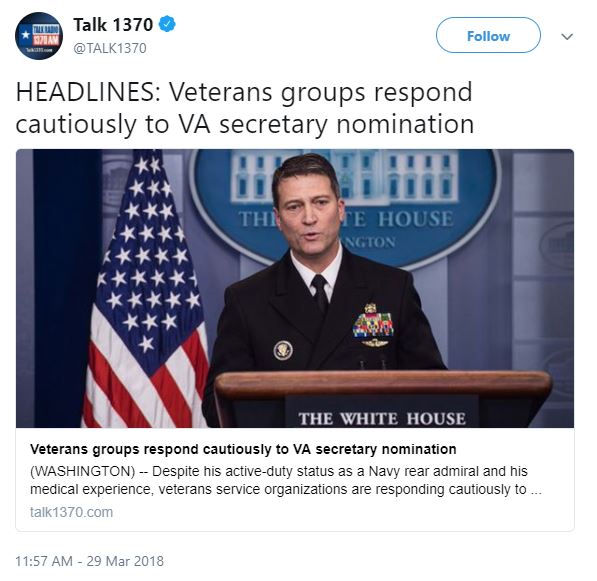 Jackson has been a White House physician since 2006 and has an active duty status as a Navy rear admiral. Despite his accomplishments, there are concerns that Jackson lacks the level of managerial experience necessary to take on this leadership position at the VA.

In January, Jackson gave Trump an above average health assessment and earlier this month, the President nominated him to receive a second star, which brought him to the rank of full rear admiral.

The Veterans of Foreign Wars was one of several veterans groups to release a statement in response to the nomination of Jackson.

“The VFW will be closely monitoring the Senate confirmation process, because what Dr. Jackson’s bio does not reflect is any experience working with the VA or with veterans, or managing any organization of size, much less one as multifaceted as the Department of Veterans Affairs,” VFW Director of Communications Joe Davis said. 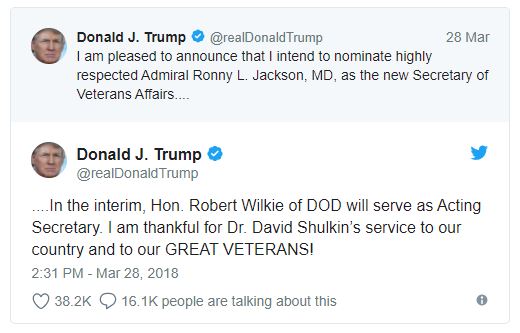 Former VA Secretary David Shulkin’s departure had been rumored for months, but it was unknown who would be his replacement prior to Trump’s surprise nomination of Jackson this week.

The VA is the U.S. government’s second largest agency. It has an annual budget of nearly $200 billion and cares for more than nine million veterans.

In response to Jackson’s nomination, Iraq and Afghanistan Veterans of America told ABC News that they “look forward to learning more about Dr. Ronny Jackson’s vision and qualifications.”

IAVA CEO and Founder Paul Rieckhoff has some questions, though, about Jackson’s plans for the agency.

“Nobody really knows who is he. Is he an empty vessel? Does he have strong views on privatization, or reforming the VA,” he said in an interview with CNN.

“So the confirmation hearings are going to be really really important. The Senate, House, time for you guys to step up and grill this guy and find out if he is qualified to not only run the agency but care for our veterans in a time of war,” he continued.

While IAVA may be skeptical of Jackson, they have been keen on a replacement for Shulkin, who had an approval rating of 24 percent  by the organization’s members.

Jackson during a press conference at the White House (YouTube/CNN)

The American Legion declined to share its thoughts about Jackson’s experience and instead said in a statement that they want to work “directly with the President through this transition and going forward, and providing him an increased level of advice and feedback on the issues important to America’s veterans.”