A North Carolina veteran that was declared to be dead by the Department of Veterans Affairs is actually still alive, the Fayetteville Observer reported.

Charles Covell, 81, of Fayetteville, North Carolina, was surprised to find out that the Department of Veterans Affairs declared him dead last month. 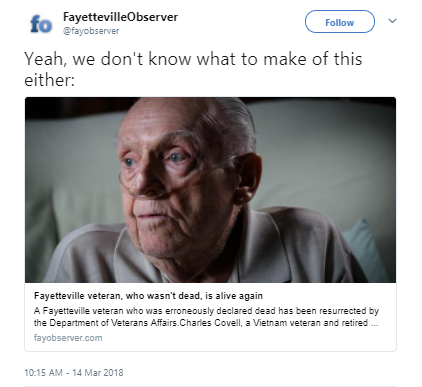 When monthly disabilities payments were not deposited in Covell’s account, Covell’s wife realized that something was wrong. They found out that a death certificate was filed for Covell in January.

A spokeswoman from U.S. Rep. Richard Hudson’s office told the Fayetteville Observer that the mistake was corrected and Covell received the payments he was owed.

Covell is among hundreds of U.S. military veterans who have their benefits suspended due to death.

The VA suspended benefits for 105,529 beneficiaries who were declared dead between October 2016 and September 2017, the VA said. Of those beneficiaries, 245 of them were inaccurate.

“That equates to a 99.77 percent accuracy rate,” the VA spokeswoman said. “While the error rates are small, they are still unacceptable, and VA has taken steps to improve our processes.”

Covell spent 12 years in the U.S. Army and served with the 82nd Airborne Division and 5th Special Forces Group at Fort Bragg.

Covell received a Bronze Star medal for his heroics during an ambush by the Viet Cong during the Vietnam War in 1965. He received the medal in 2006.

“Sgt. Covell voluntarily remained in an exposed position in an open rice field to advise, adjust supporting fire and assist as needed,” a citation for the medal reads. “After the unit sustained 10 casualties, including three leaders, he again continued to voluntarily expose himself to accurate sniper fire as he administered first aid to the wounded.”

According to the Fayetteville Observer, Covell was declared dead due to a mix-up in identification. A New York man named Rev. Charles R. Covell died in September 2011. Similar to Charles Covell, both men served in the Korean War with the Army’s 11th Airborne Division. They were both paratroopers.