The collision between the USS John S. McCain and an oil tanker near Singapore last August was caused by a “sudden turn” that put the U.S. warship into the path of the oil tanker, according to a Singapore government report, Reuters reported Thursday. 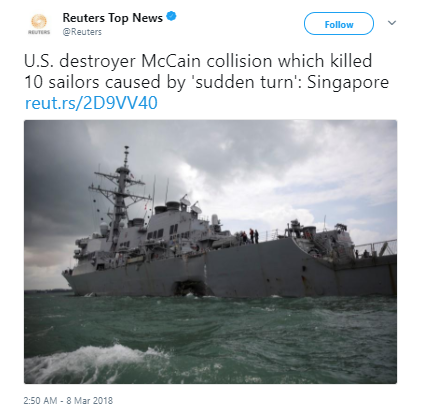 On Aug. 21, 2017, 10 U.S. sailors were killed when the USS John S. McCain collided with Alnic MC in Singapore territorial waters in the Singapore Strait.

“The collision between the USS John S McCain (JSM) and Alnic MC (AM) as they were transiting through the Singapore Strait happened because of a sudden turn to Port by JSM, which caused it to head into the path of AM,” the report said.

“A series of missteps” took place when propulsion controls were transferred that resulted in the U.S. warship making a more sudden turn, according to the report.

Two days after the collision, Vice Adm. Joseph Aucoin was relieved of his command of the U.S. 7th Fleet.

The report “should not be used to assign blame or determine liability,” according to the Singapore report.

Several commanding officers face criminal charges or administrative action, while others have been fired for their involvement in the collisions.