The Air National Guard follows strict procedures to ensure the safety of the airspace above President Donald Trump. A video from TODAY outlines the massive military effort that protects him.

The safety procedures that are implemented when the President is in Washington, D.C., are fairly routine but are more complicated when he’s traveling. When President Trump is away from Washington, additional steps are taken to keep rogue aircraft from flying into the protected airspace that’s above him. When an infiltration is detected, F-16 fighter jets are deployed to drive the intruder away.

“When the President moves around, the Federal Aviation Administration puts a temporary flight restriction in place, and then we defend it,” Col. Bradford Everman said.

TODAY set up a demo that involved their crew flying a Cessna to see what the Air National Guard does when planes enter into protected airspace. The Guard, which was working with them to conduct the demo, treated the exercise as if there was an actual rouge aircraft entering the airspace. 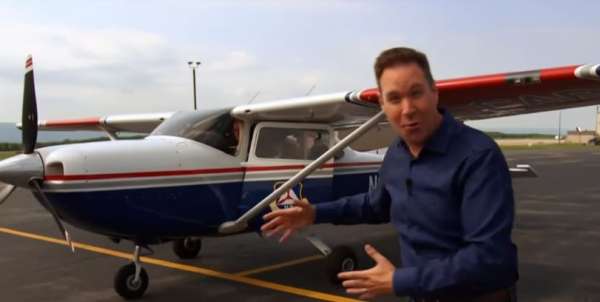 The team from TODAY prepares to fly their Cessna into a restricted airspace. (TODAY/YouTube)

After taking off from the runway, the Cessna flew into the “no fly zone.”

The pilots of the Cessna purposely ignored air traffic control, which repeatedly alerted them that they needed to leave the protected air space. The Cessna’s unresponsiveness then triggered an alarm at the Air National Guard base, which alerted the pilots to quickly get into their F-16s.

The Air National Guard launches their F-16s to intercept the rogue Cessna. (TODAY/YouTube)

In just minutes, the F-16s reached the rogue Cessna. They continued to fly close to the small plane to make their presence clear.

They then sent a message to the Cessna over aviation frequencies saying: “You have been intercepted. If you hear this transmission, acknowledge the radio call and rock your wings.”

To continue to the demo as intended, the Cessna pilot ignored the message from the F-16s and continued to fly in the protected airspace. At this point, the fighters attempted to escort the Cessna out of the airspace.

The Air National Guard flies their F-16’s close to the rogue Cessna to divert it out of the restricted airspace. (TODAY/YouTube)

With still no response from the Cessna, one of the F-16s flew close to the front of the Cessna, which is called a “head-butt maneuver.”

At this point, if this was a real situation, then the rogue plan likely would have been shot down if it fit within the rules of engagement.

While maintaining these tight safety standards is expensive, it’s necessary to ensure the safety of the President.

These same procedures are often applied to major events such as U.N. assemblies and Super Bowl games, which also have restricted airspace above them.

It’s not uncommon for planes to accidentally enter these restricted air spaces, which keeps the Air National Guard busy.