Scientists build a robotic fish to spy on ocean life 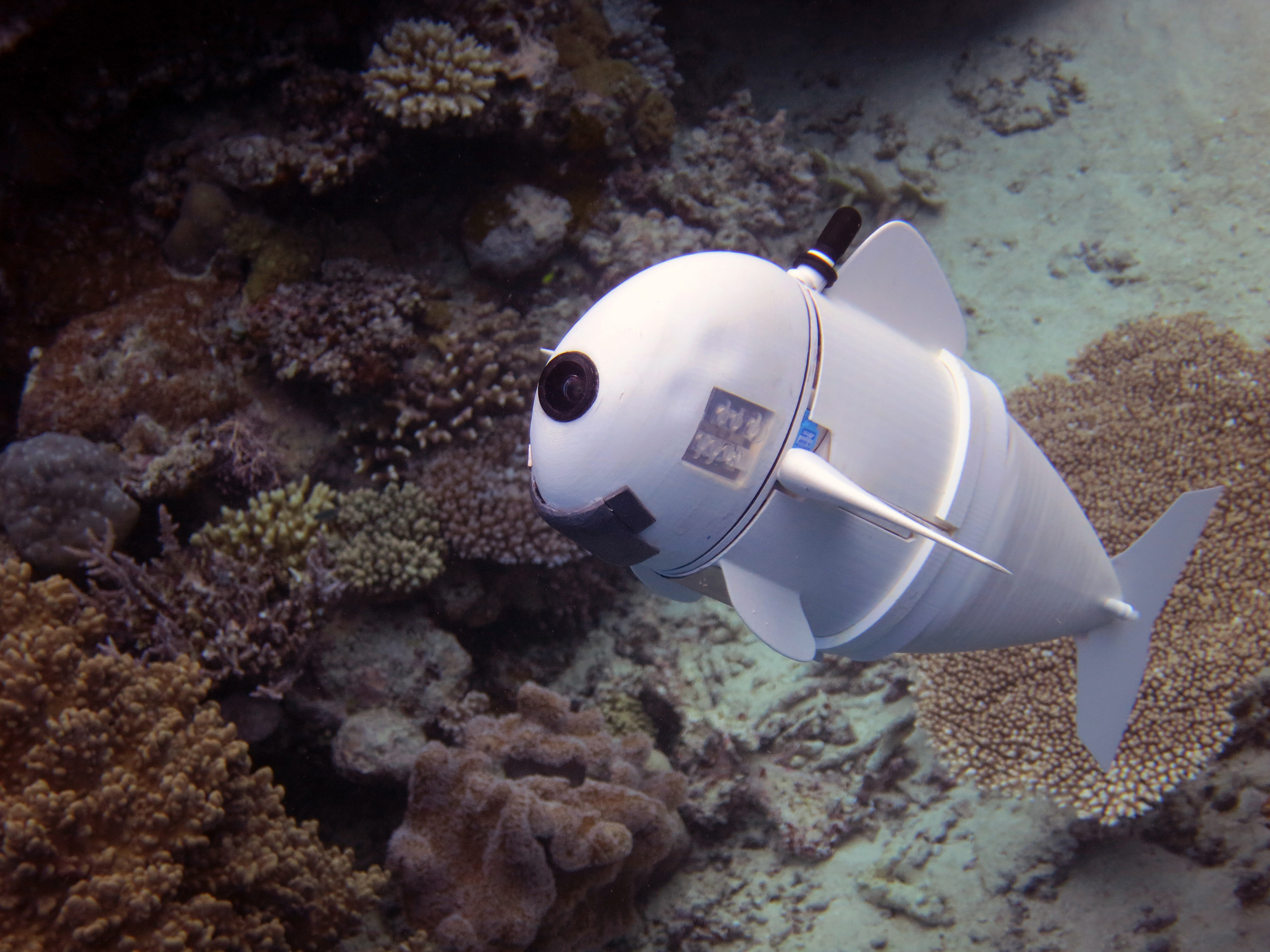 Using its undulating tail and a unique ability to control its own buoyancy, SoFi can swim in a straight line, turn, or dive up or down. (Courtesy MIT CSAIL)

Developed by researchers at the Massachusetts Institute of Technology, SoFi is a soft-bodied robot that glides silently through the water with a smooth, undulating motion designed to mimic the movements of real fish.

It is the first robotic fish to contend with the currents and pressures of an actual ocean setting for an extended period of time.

In a study published Wednesday in Science Robotics, the authors describe how SoFi can nimbly navigate a coral reef off Fiji in three dimensions, swimming up, down, left, right and forward, all at the behest of a diver armed with what looks like a Nintendo controller.

The authors also report that the robot can handle water depths of about 60 feet, and appears to swim alongside real fish without spooking them.

“For us, this fish is magical,” said Daniela Rus, director of the Computer Science and Artificial Intelligence Laboratory at MIT, who led the work. “We imagine someday it might help us uncover more mysteries from the amazing underwater world that we know so little about.”

SoFi is a fairly small robot, about a foot and a half long and weighing in at just 3.5 pounds. A hydraulic pump moves water in its soft rubber tail from side to side, allowing it to swim in a fish-like motion.

Electronics including a Linux PC, along with a fisheye lens, are stored in the robot’s head. It runs off a small battery similar to what you would find in a smartphone, and in its current iteration it can swim for about 40 minutes at a time.

Many of SoFi’s parts are 3D-printed, making it relatively easy and inexpensive to reproduce. 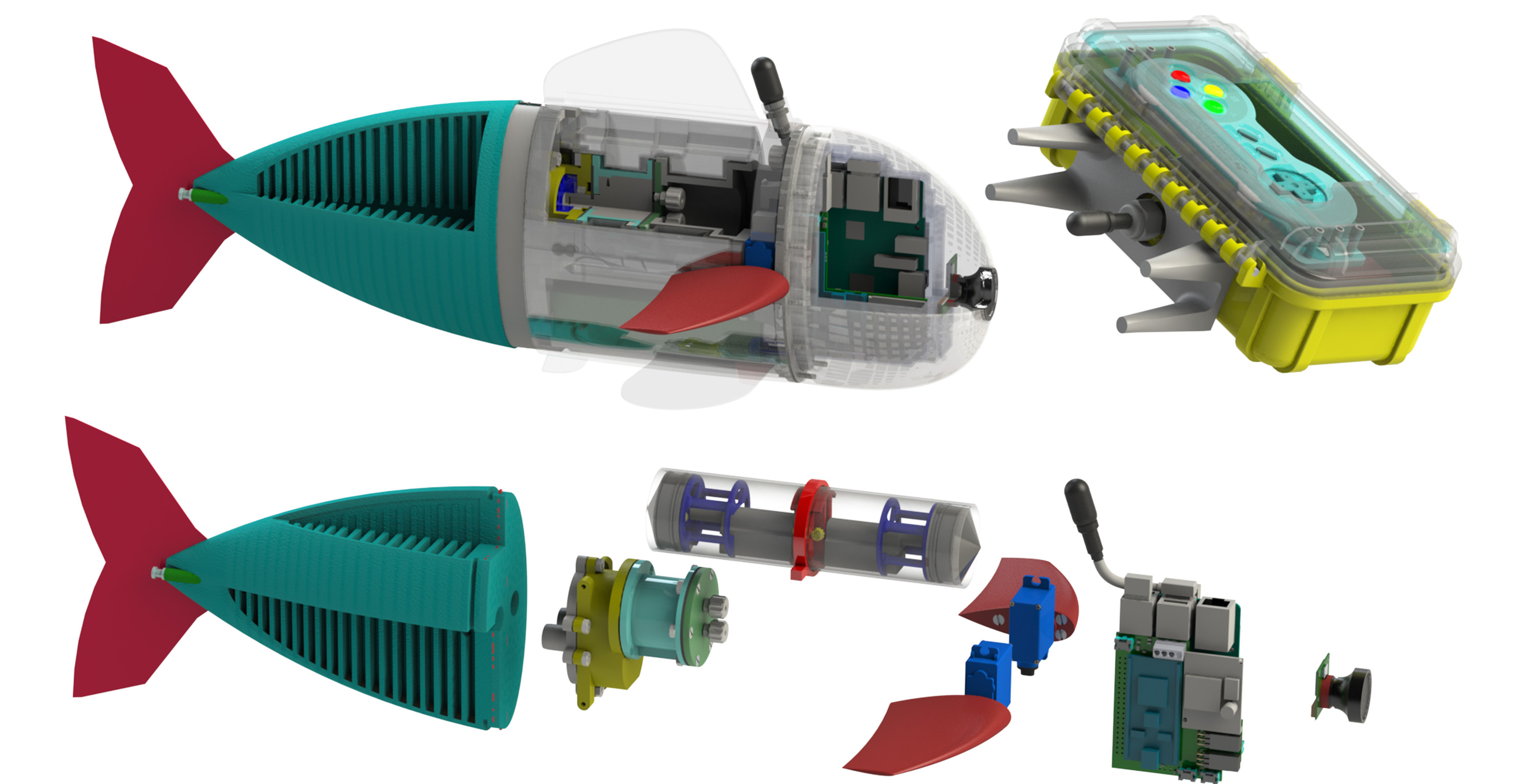 SoFi’s lightweight setup includes a single camera, a motor and the same lithium polymer battery that can be found in consumer smartphones. (Courtesy MIT CSAIL)

The design of SoFi could be easily scaled up or down, Rus said, but if it were bigger it would be harder for a diver to get it into and out of the water, and if it were smaller it would struggle more against currents.

Building a robot that can function underwater comes with unique challenges, Rus said.

Its electronics need to be housed in watertight compartments that are able to withstand large changes in pressure as the robot moves up and down in the water column.

In addition, it needs to have adjustable buoyancy so that it can swim at different depths without floating off to the surface or sinking to the seafloor.

Communications are also an issue because radio frequencies used to communicate with robots on land don’t work in the water.

Rus said buoyancy was among the biggest challenges for her team.

“If you are a diver then you know you let the air out of your dive vest when you go down and put it in when you go up,” she said. “But sometimes as you go up the air you have expands so you need to let more out. It’s really quite tricky.”

To address this issue, the team created what they called a buoyancy control unit, with urethane foam chambers that can change their density by compressing or decompressing air.

The communication hurdle was surmounted using ultrasonic signals that allow a diver to operate SoFi with the help of a custom remote control. Using the remote, a diver can be about 50 feet from the robot and still control its movements. 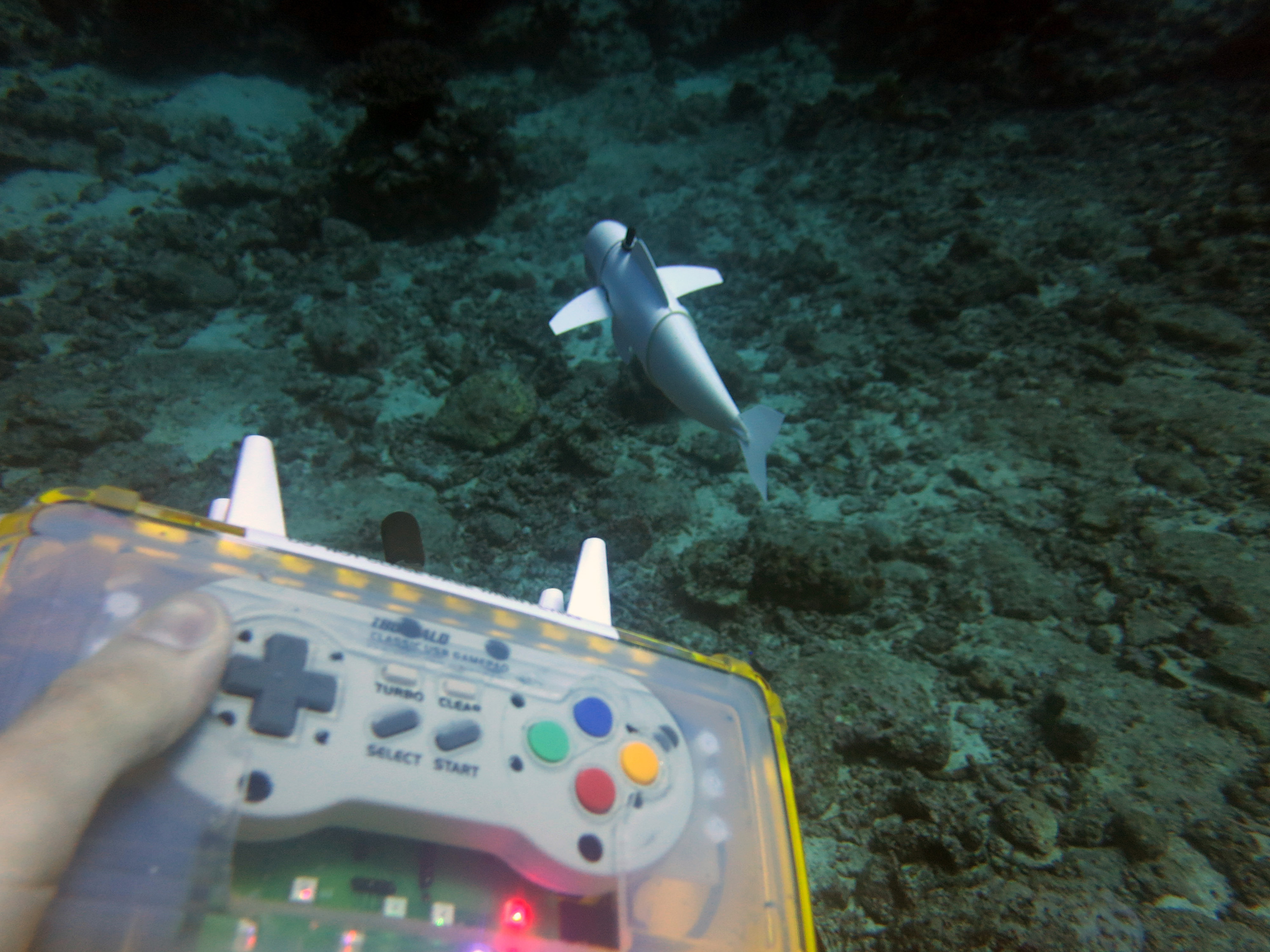 The team used a water-proof Super Nintendo controller to change SoFi’s speed and have it make specific moves and turns. (Courtesy MIT CSAIL)

Rus said her group would continue to make improvements to Sofi, including making it swim faster and giving it the ability to transmit video and do more accurate color imaging in the water. She said it’s possible the robot could learn to recognize specific fish and follow them on its own.

“We could task it to find a crown of thorns or a parrot fish or starfish and have it map the locations of these animals,” she said.

Rus’ ultimate goal is to create an instrument that can help biologists study ocean animals in an unobtrusive way.

“With this robot, I hope we can begin to peek into the secret lives of underwater creatures,” she said.

Kakani Katija, an engineer at the Monterey Bay Aquarium Research Institute, says the work is an important contribution to the bio-inspired design research community.

“The potential for studying animal behaviors with robotic mimics is especially exciting,” she said.

However, Katija added, more work needs to be done to determine whether SoFi can be used as a viable, long-term observational platform in the ocean.

“I think this new robotic fish has a lot of potential, being small, nonintrusive, with sufficient power to operate in turbulent waters,” he said. “Future versions with increased depth capability and longevity would be very valuable to marine scientists studying shallow-water ecosystems.”